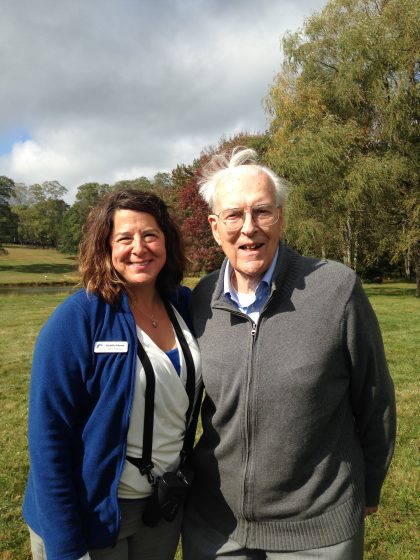 The Connecticut Audubon Society presented Dan Miller, a longtime volunteer at the Center at Glastonbury, with its Dave Engelman Volunteer Benchmark Award, at its annual meeting on Oct. 15 in Sherman, Conn. He was one of four honorees this year.

Dan has spent the past nine years volunteering roughly 4,620 hours at the Center at Glastonbury.

“Dan treats his work at the center like a paid position, helping to organize the volunteer database and update the website,” said Patrick M. Comins, executive director of Connecticut Audubon.

“He cares about our success and does what it takes to help behind-the-scenes operations run smoothly. He has great ideas, is organized, and his institutional knowledge has helped tremendously.”

Connecticut Audubon Society’s Volunteer Benchmark Award was established in 1993, and is given annually by its Board of Directors to one or more selected individuals whose volunteer activity has significantly enhanced the organization’s mission.

Each year, at the annual meeting, recipients are presented with a plaque commemorating their dedication to conservation. The other 2017 recipients are Richard Telford of Pomfret, Louise Crocco of Milford, and D.G. Warner of Southport.

In 2007, the award was renamed the Dave Engelman Volunteer Benchmark Award for a longtime member, donor, board member, and one-time interim president. Engelman epitomized the characteristics of an extraordinary volunteer by helping Connecticut Audubon Society grow both in spirit and as an organization.

You can find the list of past award winners here.