A Life Bird
A bleak winter day can be brightened by the sight of the small, graceful songbird called the Snow Bunting. Snow buntings belong to the family containing longspurs and buntings, and they migrate in flocks to Connecticut during the winter.

These birds come from the Arctic, where they breed on the tundra. In winter, they travel south to the upper portion of North America to avoid the -50° F temperatures in the Arctic. They spend the winter here in flocks, foraging in open fields or dunes. In early spring, when temperatures begin to rise in the Arctic, Snow Buntings return to establish their breeding territory.

In 2016, after seeing a photo of a beautiful Snow Bunting on Horsebarn Hill in Storrs, I was eager to find this bird on the grassy, open fields upon the hill. I had no luck before they migrated north in spring. 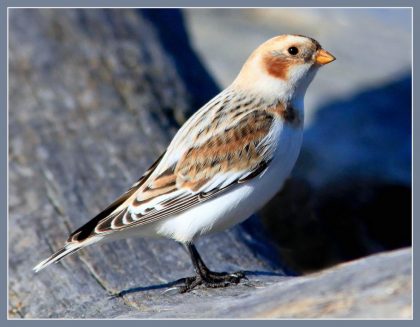 However, two weeks ago, I finally found my first Snow Buntings. Admittedly, I was in Rhode Island looking for a Lapland Longspur when I saw a flock foraging around the dunes at Misquamicut Beach. The black and white patches shining under their wing as they flew from spot to spot gave them away, and, through my binoculars, I got a glimpse of these remarkably patterned birds.

Where to find it: Luckily, you probably will not have to travel to Rhode Island to find these birds this winter. Check a nearby open field, parking lot, or coastline for a flock of small white birds. You will probably see these birds foraging on the ground, picking up small seeds and insects.

To increase your chance of seeing a Snow Bunting, it is best to bird along the Connecticut coast in places such as Rocky Neck State Park, Hammonasset State Park, Sandy Point, and Milford Point, where Snow Buntings are commonly found this time of year.

A small flock was seen at Sherwood Island State Park in Westport not long ago and, as if to prove that they’re not just limited to the coast, there was another small flock at Simsbury Airport.

What it looks like: Snow Buntings are a unique, white songbird. In nonbreeding plumage, the head, breast, and belly are white with rusty markings across the chest, around the eye, and on the crown. The bill is a faint orange color. The outer tail feathers are white, and the central tail feathers are brownish-black. 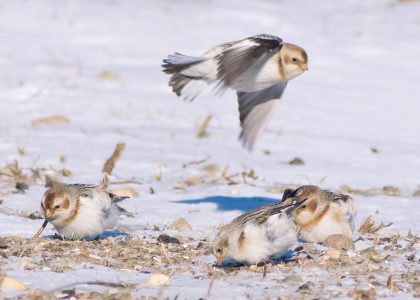 The back is a streaky brown, with wing feathers that have distinct a distinct white and black pattern. When in flight, the black wing tips make a stark contrast with the white secondaries, making these birds distinctive from similar species such as Horned Lark.

Cool Facts: The nickname for the Snow Bunting is “snowflake” because of its similarity in flight to a snowflake fluttering in a winter storm. In the Arctic breeding grounds, females lay their eggs in rock crevices insulated with a moss, grass, or fur lining.

Conservation Status: The IUCN status for Snow Buntings is Least Concern. The estimate for the global population is over 40,000,000 individuals, and IUCN assessments show no major threats of population fragmentation or fluctuation in the overall population ranging from North America to Asia.

On a smaller scale, however, separate populations in Canada, the United States, and Europe have been recorded as declining due to factors such as habitat loss, use of pesticides on agricultural fields, and climate change. Snow Bunting population numbers should be monitored locally even if the global population appears to be persistent.