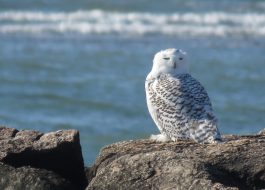 Read the Hartford Courant’s January 8, 2018, story about Snowy Owls, with quotes and insight from Patrick Comins, our executive director.

December 10, 2017
With a December 11 update on the conservation status of Snowy Owls

by Andy Griswold, Director of Connecticut Audubon’s EcoTravel Program
Welcome to the 2017 Snowy Owl season! With over 10 different sightings already reported in Connecticut and perhaps a hundred or more from Virginia to Maine, there is no doubt this is an irruption year.

In the winter of 2013-14, as you remember, there was an amazing influx of Snowies. Scientists report that such irruptions are the result, not of lemming shortages in the north, but of periods of lemming abundance, which results in a highly productive breeding season for the owls and thus many more young owls heading south. The high number of immature owls during these invasions provides evidence that breeding season in the Arctic was indeed highly successful.

My first Snowy Owl, I saw with friends at Plum Island in Newburyport, Massachusetts, about 35 years ago. We set out early in the morning chasing down a previously reported bird or two from this location. On arrival, we slowly drove past the unoccupied front guard house, and literally within a minute had found a Snowy Owl perched atop on a giant hay bale in the roadside meadow.

What it looks like: A large northern owl, the Snowy Owl is our heaviest owl. It is an unmistakable white raptor that perches prominently in open areas, often near marshes, dunes, and meadows. Although mostly white, they vary in the amount of dark barring on their feathers, the young birds being more heavily barred than adults, and females more than males. In flight, their heavy build, round head, and broad white wings are distinctive. These owls are active during the daytime, often moving from perch to perch and observed hunting.

It’s worth emphasizing that there are three basic rules that Snowy Owl observers are expected to follow (borrowed from Project SNOWStorm): 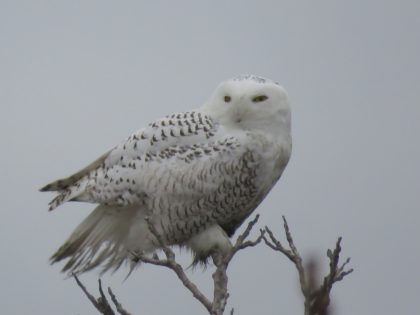 Where to find it: Open marshes, dunes, farmland, and other open areas are good places to look.

At our Milford Point Coastal Center, look for this bird on the exposed sandbar in front of the Center, but also perched on flotsam in the marsh.

Milford Point, Stratford Point, and Stratford’s Long Beach have reported birds this year. One or two have been seen at the mouth of the Connecticut River.

Sightings at Hammonasset Beach State Park, Stratford’s Sikorsky Airport, and Stonington Point were recently reported. Additionally, there were at least a couple of reports from inland locations. An all-white Snowy was perching on a rooftop at Gouveia Winery in Wallingford, on Sunday, December 10, and an early-morning driver saw one fly across the road in Bloomfield at 1:30 a.m.

Another good way to find a Snowy Owl is to look for a gaggle of warmly-dressed men and women with scopes and cameras on tripods: birders who are observing the bird.

How to find it: Snowy Owls are relatively easy to find in an irruption year. Focusing on coastal areas is your best bet. Scan all open areas for a prominent white bump in an exposed area. Sometimes they may be found roosting on a rooftop of a beach cottage, but almost never in a tree. You will do best with a spotting scope.

What if it isn’t there: There are lots of winter birds moving down along the shoreline now, so you will be rewarded with a variety of duck species including Red-breasted Merganser, Bufflehead, and Common Goldeneye, Red-throated and Common Loon, and many other waterbirds frequenting the same general location as the owl.

Conservation status: The IUCN lists the Snowy Owl as a species of Least Concern.
Correction: After posting this, we learned that the IUCN recently changed the Snowy’s status, from least concern to vulnerable. One estimate has their global population dropping from 200,000 birds to maybe only 14,000. The suspected cause of course is climate change. Read more here.