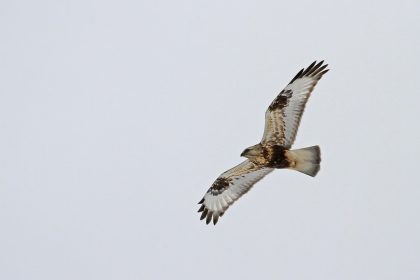 by Nick Bonomo
What it looks like: Rough-legged Hawks are large birds of prey – similar in size and proportions to our familiar Red-tailed Hawk – that come in two color morphs.

The distinctive dark morph looks unlike any other local bird of prey in that its body is an entirely dark sooty color. When these birds take flight, the silvery undersides of their flight feathers contrast sharply with the dark body and wing linings. The undersides of their tails are also pale silvery with a broad dark tip.

The light morph birds are not quite as distinctive, but they are just as beautiful. Perched, the light birds appear pale-headed with a solid dark belly patch, and their legs are extensively feathered as an adaptation to high Arctic living. In flight they are best recognized by their dark carpal patches that are visible on the underside of the wing, in combination with a white tail that has a broad dark tip.

Where to find it: These are open-country birds that live on the tundra of the high Arctic. When they are seen in Connecticut, it is usually while they are hunting similarly open spaces, such as salt marshes and expansive fields. They are most easily found along the coast at places such as Connecticut Audubon’s Coastal Center at Milford Point and Hammonasset Beach State Park in Madison, where birders found a Rough-legged on Monday and Tuesday. Another was seen at Long Beach in Stratford on Tuesday.

Look for them hovering over marshes or perched at the very top of a tree along the marsh edge.

I took this in-flight photo of a light morph Rough-legged Hawk in February 2015 along the frozen, barren coast of Nova Scotia. That frigid environment, where it is hard to imagine anything surviving for long, is where this species thrives.

When to look: These far northern breeders reach Connecticut in small numbers each winter, though their numbers may fluctuate greatly from year to year. They may arrive as early as October, but they are most often seen from December through March.

We occasionally see mini irruptions following periods of extreme cold and snow. Last week’s strong winter storm and Arctic blast predictably resulted in several sightings over the ensuing few days. This is as good a time as any to get out there and find one.

Conservation status: The Rough-legged Hawk is considered a species of “Least Concern” by the IUCN Red List. It is a widespread holarctic species with a stable population.

Nick’s post marks the second time we’ve featured Rough-legged Hawk. Take a look at what Sean Graesser wrote about them four years ago.