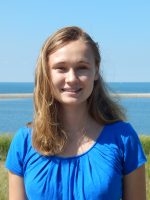 By Genevieve Nuttall
Bird Conservtion Programs Associate, Audubon Connecticut
Normally, this time of year is bustling with spring activity. This month has been holding onto winter, but the return of charismatic migrants, like the Great Egret, is a hopeful sign that warm weather is approaching.

The Great Egret is a large, long-legged wader that can be seen foraging in wetlands, lakes, and marshes. This species comes to Connecticut during spring migration and stays for the breeding season. In winter, individuals travel as far south as the southern tip of Central America.

Great Egret breed mostly along the southern Atlantic Coast into Central America but can be observed feeding or migrating throughout much of the contiguous United States.

During the last few weeks, Great Egret have been moving through the state and some have returned to hunt before the breeding season kicks in. Last week, of a group of three Great Egret glided past Stratford Point. Each sparsely flapped its powerful wings to push forward against the dense, foggy air. The group dominated the sky with their large presence, and they flew directly into the fog in the direction of Long Island Sound, possibly making their way to Long Island as a stopover site! 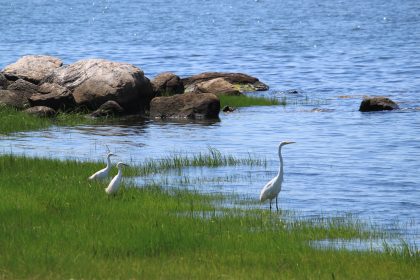 What it looks like: This elegant bird has remarkable white plumage and develops showy plumes during the breeding season. Great Egret can be confused with Snowy Egret which has a similar body shape and plumage. Great Egret are noticeably larger Snowy Egret, but if a size comparison is not available, bill color is a useful trait. Great Egret have large, pointed, yellow bills whereas Snowy Egret have black bills.

The legs of the Great Egret are also different in that they are all black. Snowy Egret have black legs with yellow feet. You may also hear toad-like sounds coming from Great Egret; they are known for their loud, croaking calls.

Where to find it: In Connecticut, it is easy to find a Great Egret enjoying the food sources offered in marshes, wetlands, and other aquatic systems. Most coastal wetlands are reliable sites for these birds all summer. We even have rookeries for Great Egret on offshore islands along the coast! It is important that these areas, such as Charles Island in Milford, remain undeveloped and undisturbed so that Great Egret nesting in the state can contribute young to their prospering population.

Behavior: Great Egret have behaviors that are similar to other herons and egrets. They search for prey by slowly wading or standing still to wait for prey to approach them. Once prey is located, they stalk it until it is time to strike with their strong bill. They will eat anything from fish to birds to small mammals!

In the breeding season, Great Egret congregate, often with other herons and egrets, to share their nesting site. Pairs build their nests in the tops of trees, and each pair is territorial of its own nest. Great Egret chicks are competitive in the nest and the strongest chick can outcompete its siblings for food in years with limited food availability. Less than a month after hatching, Great Egret young are ready to leave the nest! 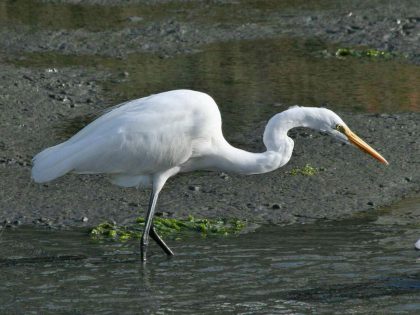 Conservation status: The Great Egret population is doing well considering its history. The Great Egret was almost extirpated from the country in the late 1800s because their breeding plumes became a popular fashion decoration on women’s hats.

Individuals were killed on their breeding grounds for their feathers which were then sold as a fashion good. Great Egret could not reproduce, and their population plummeted. The ban on harvesting feathers from this species helped it recover.

Today, Great Egret are of low conservation concern but are subject to habitat degradation. Foraging sites for this species must be preserved and fragile nesting areas cannot be developed or disturbed.