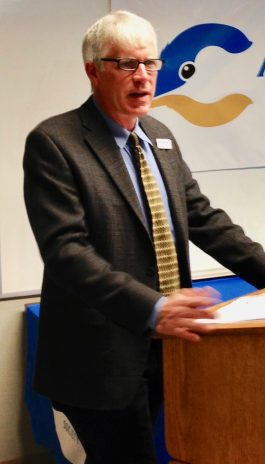 July 27, 2018 – Executive Director Patrick Comins joined U.S. Senator Richard Blumenthal and other conservationists at a press conference in New Haven today to advocate against changes being proposed for the federal Endangered Species Act.

Listen to Patrick being interviewed on the subject by WFUV radio here.

The Connecticut Audubon Society is very concerned about the current rush on several fronts to reduce the protections afforded to our threatened and endangered species through the federal Endangered Species Act. The Act has had many success stories since its implementation in 1973 and has helped save many species from extinction.

The results are obvious here in Connecticut, where it’s no longer unusual to see Peregrine Falcons or Bald Eagles and we even occasionally see vagrant Brown Pelicans as the numbers in the heart of their range have recovered.

An immediate concern is the proposed rollback of protections for threatened species, such as the Northern Long-eared Bat, Bog Turtle, Red Knot, and especially Piping Plover.

Connecticut Audubon i– n partnership with the Audubon Alliance for Coastal Waterbirds, municipalities, the U.S. Fish and Wildlife Service and the Connecticut Department of Energy and Environmental Protection – has worked hard for years to successfully increase the numbers of nesting Piping Plovers in the state. Last year there was a record 66 pairs. If they lose protection throughout their range, it could be a disaster for the birds.

We also think it’s a bad idea to make it more difficult to add new species to the list, even if protections are warranted. There is currently a review of the status of Saltmarsh Sparrows for their potential inclusion on the list. Saltmarsh sparrows nest here in connecticut

and are highly vulnerable to sea level rise. If that decision is delayed it may mean this species could go extinct before it is even afforded additional protections or conservation resources to find solutions that may lead to its recovery.

There may be other Connecticut species worthy of inclusion on the list such as Wood Turtles, Spotted Turtles and the Frosted Elfin butterfly. Such declining species deserve a thorough review of their status based solely upon the biological merits of the threats facing them.