A Successful Summer for Purple Martins at the Coastal Center 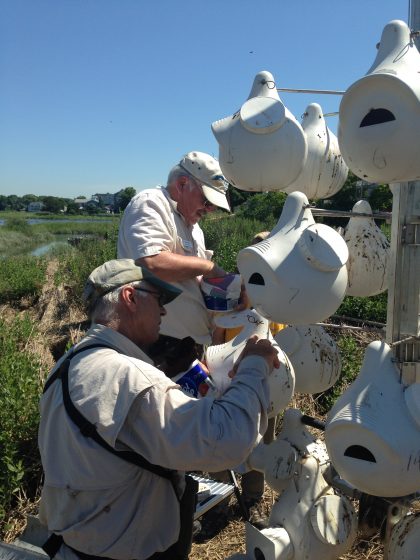 Volunteer Frank Mantlik, foreground, and Board member Michael Aurelia remove baby Purple Martins from the gourds at the Coastal Center.

August 2, 2018 – The population of Purple Martins continues to rise at the Milford Point Coastal Center.

This summer, 128 nestlings were fitted with identifying leg bands by a team of staff and volunteers from the Connecticut Department of Energy and Environmental Protection and the Connecticut Audubon Society.

These dark, graceful, noisy swallows are one of several bird species – along with Ospreys, Bald Eagles and others – that have enjoyed population increases in Connecticut recently, largely because of successful conservation work.

The Coastal Center is the site of one of 30 known Purple Martin colonies in the state. Although data are not available on all of them, nesting success in recent years plus the discovery of several new colonies has prompted state officials to remove martins from the list of threatened species in Connecticut.

For Purple Martins, the conservation efforts are essential. They build nests only in man-made houses – usually plastic gourds. Nestlings survive and fledge at a higher rate when the nests are monitored and maintained throughout the April to August season.

Aurelia observed, “I think we can say that better management of our colony is responsible for the increase in chicks banded since 2015. Weather also plays a role in determining the availability of food and survivability of chicks during the season. Our colony had 46 nests built this year. Not all were active. That’s up from 35 in 2017 and 32 in 2016.

“There is plenty of room for the colony to grow even if we just keep doing what we are doing.”

With help from grants from the Connecticut Ornithological Association, Connecticut Audubon has bought and erected new gourds at the Milford Point colony in recent years.

“That probably attracted new and younger birds,” Patrick Comins, Connecticut Audubon’s executive director, said. “Those birds are now older and wiser and better at hunting so they are producing more chicks.

The Coastal Center colony is one of the largest in the state. There are other big colonies in Ledyard, Clinton and Guilford, and at Hammonasset and Sherwood Island state parks. The successful colonies are almost exclusively located near Long Island Sound or on lakes, and Connecticut Audubon is trying to establish a new colony alongside the lake at its Deer Pond Farm preserve in Sherman.