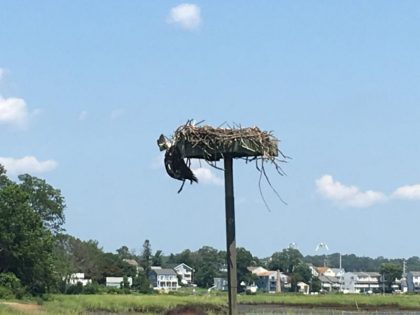 The Osprey is dangling by one leg from its nest.

August 6, 2018 – Almost a dozen people spent their Sunday afternoon trying to save an Osprey that was dangling from its nest, caught on fishing line on the Ash Creek salt marsh in the Black Rock section of Bridgeport, on the Fairfield border. It was a hot afternoon of hard work, and not a happy ending.

[Click here for information, including a map, about where to recycling monofilament line in Bridgeport and Fairfield.]

This is our third wildlife rescue in Ash Creek in the past month.  Abandoned fishing line has become a tremendous danger to our Ash Creek birds.  We knew it was just a matter of time before our osprey would be affected and unfortunately today was that day.  We have been working very hard on trying to get the Fishing Line Recycling Bins built and installed. The importance of this project was underscored today when a young female osprey was spotted hanging upside down from her nest with her leg entangled by fishing line this morning.

Scott Burns, President of the Black Rock NRZ sent me an email at 10:10 AM with a blurry photo of what appeared to be an osprey hanging upside down from the nest.  Milan Bull, Senior Scientist of Connecticut Audubon was out of town, but asked me to verify that this was indeed the case before beginning another rescue mission. 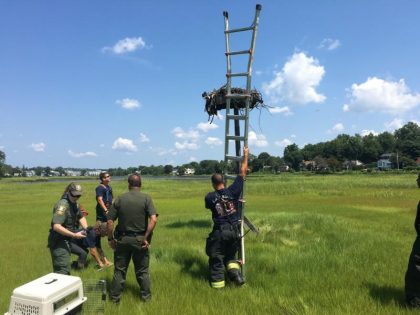 A Bridgeport firefighter raises the ladder.

Pete Spain, our Black Rock Councilperson, and his wife, Kate, immediately went down to verify the situation.  I also called the Osprey Nation Coordinator, Melina Giantomidis, and our local osprey warden, Melissa DeVaux (203-258-2564) who watches over the Ash Creek nest. Pete Spain called me and verified that there was an osprey hanging upside down and struggling from the Ash Creek nest. 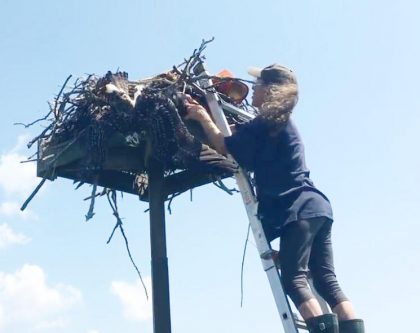 Betsy of Christine’s Critters cuts the fishing line to free the young Osprey.

I immediately started calling the raptor rehabbers across Connecticut.  I first called Wildlife in Crisis (203-544-9913) and left a message. I then called Christine’s Critters in Weston (203-856-5596) and reached Christine on her cell phone.  She remembered me from the past two rescues and said she would come right down, but needed the Fire Department to provide the equipment to get to the nest. 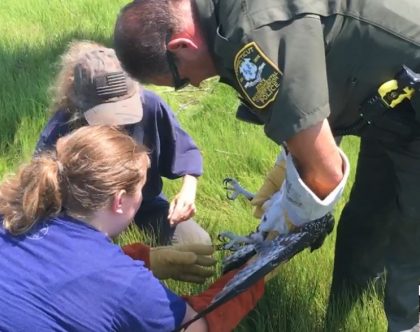 Luckily it was low tide so a boat was not needed.  A small crowd had started to form as Bridgeport Fire Department Deputy Chief Ron Rolfe drove by on his way back from the gym.  He stopped to see if he could help. Deputy Chief Rolfe was able to get Ladder 11 of the Bridgeport Fire Department to come out and meet the rehabbers at the St. Mary’s sand spit.  Pete Spain had called the DEEP Hotline (860-424-3333) and State DEEP officers Bernier and Hays came immediately. They were there even before the Fire Department or rehabbers arrived.  They were surprised that we had already reached a rehabber and one was on the way as that’s usually their job.

By 12:05 PM the Bridgeport Fire Department had set up the ladder and Betsy of Christine’s Critters had climbed up to the nest and was able to cut the fishing line to free the osprey.  Christine was on the ground and examined the young bird with the help of DEEP Officer Hays. The raptor had a rope embedded in her leg as well as being caught up in fishing line. Christine and Betsy brought the young female osprey to a vet in North Haven.  He had lost a lot of blood, but as you can see from the photo above, she was still alert when she arrived at the vet.

Unfortunately, the young female osprey passed away at 7 PM. 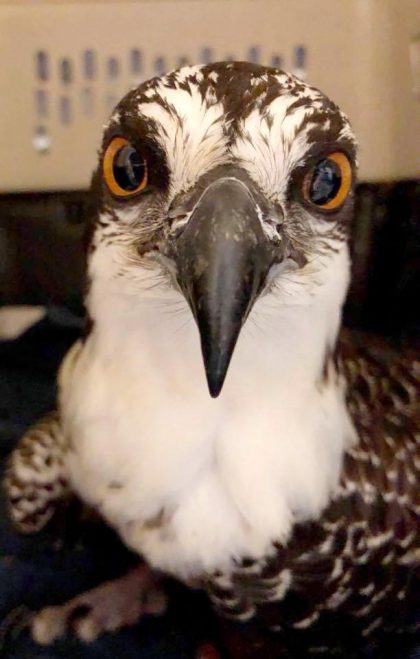 It appears that the bird’s leg had become entangled with twine shortly after she was born and as she grew, the twine embedded itself in her leg all the way to the bone.  Even if the vet had been able to save her, she would never have been able to be released into the wild again. The young osprey died peacefully in the rehabbers’ arms after being given pain medication.  The trauma of the experience was apparently too much for her. Christina and Betsy were terribly upset. Right now they have 29 birds in rehab and 20 non-releasable birds. They are amazing people and we are grateful our young osprey was in their capable hands.

This fall we will need to clean out the nest.  It’s too dangerous to do it when the osprey are around.  In fact, Betsy was taking a big risk in rescuing the young osprey as her mom was diving at the rescuers.  Christine believes the number of people present prevented the female osprey from attacking the rescuers.

If you have Facebook you can see the video of the rescue here on Pete Spain’s FB page: