In Time for Summer, Fishing Line Recycling Bins Installed in Bridgeport and Fairfield to Protect Wildlife

This map shows the location of the new monofilament line recycling bins:

June 3, 2019 – Fishing in parts of Fairfield County might be safer this summer, for birds and other wildlife.

A community-wide effort to build fishing line disposal bins and install them in the places in Fairfield and Bridgeport where people like to fish will make it easier for anglers to safely dispose of their monofilament line.

Monofilament line, when left on the shore rather than being recycled properly, often tangles birds in particular, choking them or rendering their wings or legs useless.

The issue drew attention locally last summer when an Osprey nesting on Ash Creek in Fairfield got caught in monofilament fishing line and later died.

Now, in time for the summer fishing season, new durable PVC bins designed for monofilament line have been put up in 19 locations on local docks and piers in Fairfield and Bridgeport. Five Fairfield high school students from the volunteer group Scholar Athletes Serving Others built the tubular bins last year.

One of the students, Ryan Burress, said, “I‘ve been fishing my entire life. Not until I got involved in this project did I realize the danger that used fishing line is to our environment and wildlife. Building and distributing the bins was a worthwhile project.”

Community activist and osprey monitor Madeline Dennis Raleigh, along with Gail Robinson, president of the Ash Creek Conservation Association, developed and organized the project. Other participants include the City of Bridgeport, the Town of Fairfield and the private businesses and landowners where some of the bins are placed.

The Connecticut Audubon Society is the lead sponsor of the project.

A recycling bin in Fairfield.

Milan Bull, senior director of science and conservation at the Connecticut Audubon Society, said, “We hope this project will inspire groups and marinas in other areas around the state  to build and install their own fishing line recycle bins to protect our wildlife.”

Monofilament line has long been a serious issue for birds and wildlife because of its strength and the fact that it lasts essentially forever. It can’t be recycled with normal plastics through municipal recycling programs.

Any part of a bird’s body can get tangled, causing it to strangle, starve, and lose the use of its wings and legs. The Osprey that had hatched on Ash Creek got caught in fishing line and dangled from its leg until rescuers freed it. The bird later died at a wildlife rehabilitation facility.

“Several wildlife rescues at Ash Creek spurred us to get involved with this project,” Gail Robinson said.

Each location has a site monitor who will periodically empty their assigned bin using proper safety procedures.

Madeline Dennis Raleigh said, “The Connecticut Department of Energy and Environmental Protection will collect the discarded line and send it to Pure Fishing America/Boat US who will melt the line into plastic pellets that are made into tackle boxes and fish habitats.”

In addition to the new bins in Bridgeport and Fairfield, there are approximately 35 other locations in Connecticut for recycling monofilament line, including Connecticut Audubon’s Milford Point Coastal Center. More information about those can be found on the CT DEEP website. 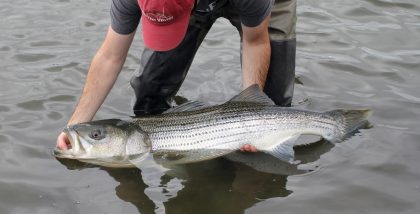 After catching this striped bass, the angler recycled his monofilament line. Photo courtesy of Kieran Broatch.