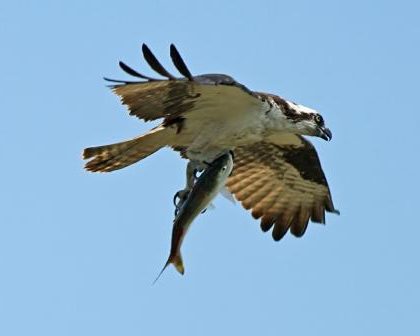 An Osprey carries a fish to its nest. Photo courtesy of Mark Jankura.

September 26, 2018 – A memo from Executive Director Patrick Comins about a recent decision to protect the Northeast’s herring fishery

I am thrilled to report some great and unexpected news. Yesterday the New England Fishery Management Council passed Amendment 8 to the Atlantic Herring Fishery Management Plan. Having corresponded with Connecticut’s representatives on the Council, they did not expect this measure to pass. This decision is the culmination of years of scoping, scientific review, and public comment.

Connecticut Audubon had played a fairly large supporting role in this process by submitting testimony, along with Audubon Connecticut and the Connecticut Ornithological Association, to the chair of the Council in June and recently reiterating our points to Connecticut’s representatives and by engaging our fellow independent Audubons in New England in the process as well.

Atlantic herring are vital prey for many species of marine wildlife, including fish eating birds, sport fish and marine mammals.  These decisions will beneficially affect Long Island Sound and the wider New England ocean ecosystem. This comes at a critical time: this year’s stock assessment projected a steep decline for the population, causing NOAA Fisheries to take the unusual step of cutting this year’s catch limit while in season to forestall even deeper cuts in the years to come.

Amendment 8 has two conservation provisions. It will reduce harvest of this critical forage species and define how catch limits will be set for at least the next three years. The Pew Charitable Trust, a lead player in this effort, estimates that this action will keep an additional 31 million pounds of herring in the water over next three years, which will help the declining population rebuild and provide more essential forage for predators.

Additionally, this ruling will establish a coastal buffer zone in all New England waters, in which industrial midwater trawlers are prohibited from fishing throughout the year. The buffer extends 12 miles from the coast in most areas; around Cape Cod, the area extends nearly 20 miles from shore.  This is all amazing news for the health of the Long Island Sound Estuary.