Press Release – A study of Old Lyme’s Tree Swallow roost by Cornell, UMass and others could revolutionize scientific understanding of the species 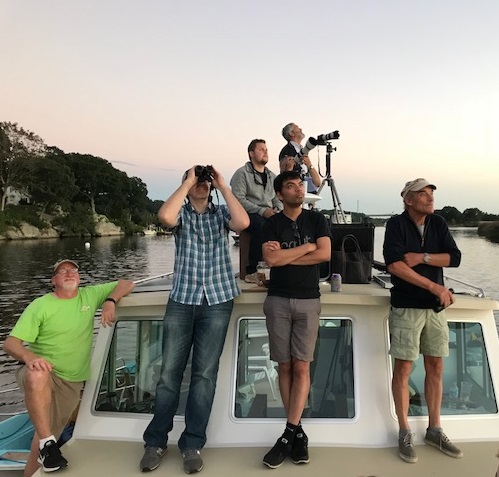 Professor Winkler’s team on the Connecticut River, waiting for the Tree Swallows to roost.

October 3, 2018 – As natural spectacles go, there might be nothing in Connecticut to match the roosting at dusk in late summer of Tree Swallows in Old Lyme.

On an evening and morning in mid-September, they conducted a reconnaissance and photographic imaging study of the Tree Swallows as they gathered to roost and then flew off for a day of foraging.

The goal is to establish the first complete quantification of a Tree Swallow roost based on an actual count of individual birds, according to David Winkler, professor of ornithology at Cornell University and a researcher on the project.

The scientists are hoping their work not only answers the question of how many birds use the Goose Island roost, but establishes a method for other ornithologists to follow elsewhere. The photographs from the project will be used to create the algorithms and computer imaging program to count the individual birds and produce a legitimate and accurate count.

If the project succeeds, the scientists will know how many Tree Swallows roost in Old Lyme. They will then be able to apply the same methods to roosts in Florida and Louisiana to which the Old Lyme birds migrate for the winter.

Winkler explained that when Tree Swallows leave their roosts around sunrise, they fly to altitudes that make them visible in weather radar. The distinctive “ring echoes” that their dispersing flocks make in the radar have allowed ornithologists to locate about 700 Tree Swallow roosts scattered across the country. But until now, scientists have had no way to relate a given radar roost signature to the size of the roost that made it.

The work at Goose Island could change all that. 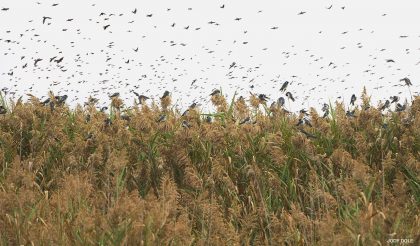 “These methods have the potential to provide enormous amounts of data of radically improved accuracy and to revolutionize our understanding of Tree Swallows and their migratory and wintering biology,” Winkler said. “Not only will we thus be able to monitor the ebbs and flows of swallows at the Goose Island roost, but we will be able to relate their movements and numbers to those of their brethren all across the continent.”

Winkler and his team have been helped by the Roger Tory Peterson Estuary Center’s Conservation Science Committee, whose members are Kate Millard, Nell Twining, Ralph Wood, and John Forbis.

Others involved in the project include Subhransu Maji and Daniel Sheldon, professors in computer science at the University of Massachusetts at Amherst, experts in computer imaging and machine learning. Sheldon earned his PhD from Cornell, where he did postdoctoral work with Winkler. Photographer Jody Dole, along with his son, of Chester, took photographs. Dick and Richard Shriver provided the boats and handled the piloting. 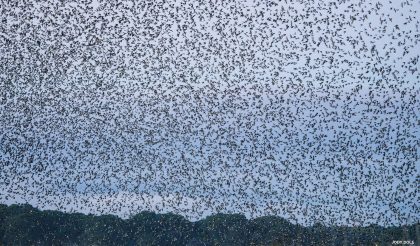 The nightly gathering of Tree Swallows on Goose Island has become a popular attraction. As dusk falls, the birds fly in from throughout the region, assembling in vast, swirling clouds before settling into the reeds. Boats converge as well – larger tour boats like those led by Connecticut Audubon’s EcoTravel program and dozens of smaller craft, down to canoes and kayaks, as well.

The observers watch with a sense of wonder. How many birds could there possibly be? When Winkler’s team finishes its analysis, they’ll know the answer. And eventually a lot more.