Our view: Congress must act on two pain-free proposals to provide funding for land and wildlife protection

The Connecticut Audubon Society has actively supported the effort to permanently reauthorize the Land and Water Conservation Fund. We worked with a coalition to make sure our voice and the voices of other independent state Audubon Societies were heard in Washington.

Patrick Comins, Connecticut Audubon’s executive director, said recently: “We wrote in September, ‘If ever there was a no-brainer, reauthorizing the Land and Water Conservation Fund is it.’ Conservation funding, when well-planned and well-spent, is without a doubt the best way to protect land for the benefit of the American public and the country’s wildlife. This is an important milestone for conservation, and we appreciate the hard work from across the country that made it happen.”

Connecticut’s Senate and House delegation all supported the Land and Water Conservation Fund. Connecticut Audubon sends its thanks to U.S. Senators Blumenthal and Murphy, and to Representatives Hayes, Himes, DeLauro, Courtney, and Larson!

The following essay was published on the Op-Ed page of the Hartford Courant on Tuesday, September 25, 2018

by Patrick Comins and Tom Andersen
Among the wisest decisions ever made in Connecticut were those that led to the creation and expansion of Hammonasset Beach, Rocky Neck, Bluff Point, and Sherwood Island state parks.

Those decisions started long ago, in the early 1960s, and the projects were carried out in phases over a number of years. Land on Long Island Sound was acquired, recreational facilities built and improved, plans for protecting wildlife developed and implemented. It took a combination of funding sources to complete them but among the most important was the federal Land and Water Conservation Fund.

The amazing thing? They were only four of 463 projects the Land and Water Conservation Fund paid for in Connecticut during those years.

The tragedy? The U.S. Congress is on the brink of letting the fund expire. 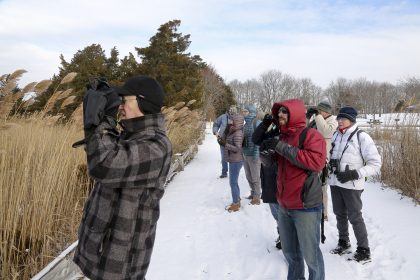 It’s a cliché to say that a decision is a no-brainer. But if ever there was a no-brainer, reauthorizing the Land and Water Conservation Fund is it. 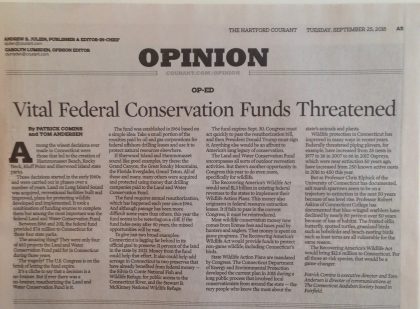 The fund was established in 1964 based on a simple idea: take a small portion of the royalties paid by oil and gas corporations for federal offshore drilling leases and use it to protect natural resources elsewhere.

If Sherwood Island and Hammonasset sound like good examples, try these: the Grand Canyon, the Great Smoky Mountains, the Florida Everglades, Grand Teton. All of those and many, many others were acquired and protected using money that drilling companies paid to the Land and Water Conservation Fund.

The fund requires annual reauthorization, which has happened each year since 1964. And although passage has been more difficult some years than others, this year the LWCF seems to be teetering on a cliff. If the fund fades away after 50 years, the missed opportunities will be vast.

To give just two broad examples: Connecticut is lagging far behind in its official goal to preserve 21 percent of the land in the state by 2021. Money from the LWCF could help that effort. It also could help add acreage in Connecticut to two preserves that have already benefited from LWCF money – the Silvio O. Conte National Fish and Wildlife Refuge, for public access to the Connecticut River, and the Stewart B. McKinney National Wildlife Refuge.

The fund expires September 30. Congress must act quickly to pass the reauthorization bill, and then of course President Trump must sign it. Anything else would be an affront to America’s long legacy of conservation.

The LWCF encompasses all sorts of outdoor recreation activities. But there’s another opportunity in Congress this year to do even more, specifically for wildlife.

The Recovering America’s Wildlife Act would send $1.3 billion in existing federal revenues to the states to implement their Wildlife Action Plans. Like the LWCF, the money also originates in federal resource extraction leases.

Most wildlife conservation money now comes from license fees and taxes paid by hunters and anglers. That money is spent on game programs. The Recovering America’s Wildlife Act would provide funds to protect non-game wildlife, including Connecticut’s birds.

State Wildlife Action Plans are mandated by Congress. The Connecticut Department of Energy and Environmental Protection developed the current plan in 2015 during a long public process that involved local conservationists from around the state – the very people who know the most about the state’s animals and plants.

Wildlife protection in Connecticut has improved in many ways in recent years. Federally-threatened piping plovers, for example, have increased from 26 nests in 1977 to 36 in 2007 to 66 in 2017. Ospreys, which were near extinction 50 years ago, have increased from 250 known active nests in 2016 to 450 this year.

But as Prof. Chris Elphick of the University of Connecticut has documented, saltmarsh sparrows seem to be on a trajectory to extinction in the next 50 years because of sea level rise. Prof. Robert Askins of Connecticut College has documented that blue-winged warblers have declined by nearly 80 percent over 50 years because of loss of habitat. The frosted elfin butterfly, spotted turtles, grassland birds such as bobolinks, and beach-nesting birds such as least terns are all vulnerable for the same reason.

The Recovering America’s Wildlife Act would bring $12.6 million to Connecticut. For all those at-risk species, that would be a game-changer.