February 20, 2019 – The preservation of Plum Island is again on the agenda in Washington D.C.

U.S. Senator Richard Blumenthal announced at a press conference in New London today that he was reintroducing the Plum Island Protection Act, to prevent the federal government from selling the 840-acre island, which lies at the eastern end of Long Island Sound, off the North Fork of Long Island. Among those who spoke in support of the legislation was Patrick Comins, executive director of the Connecticut Audubon Society. 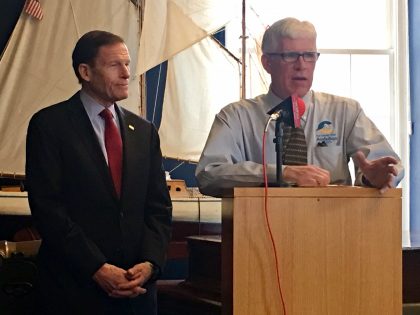 Here is the text of Comins’s statement:

Plum Island is an 840-acre ecological and historical treasure located off the coasts of New York and Connecticut in Long Island Sound at the confluence of two estuaries of national significance, Long Island Sound and Peconic Bay. The island has been recognized as an Important Bird Area by the National Audubon Society. It serves as critical nesting, foraging, migratory stopover and wintering habitat to more than 210 bird species, including the federally endangered Roseate Tern and federally threatened Piping Plover and Red Knot, along with thousands of migrating birds.

A recent biological survey of the island uncovered more than 1,000 species of plants and animals and they noted that they were barely scratching the surface of the insect diversity supported by the relatively unspoiled habitats of the island. Investigators even found a species of moth that had not been recorded in New York State in more than 100 years. One hundred and eleven of these species are classified as being of conservation concern (meaning that the New York State Department of Conservation has ranked these species as either endangered or threatened or in potential need of protection). Thirteen species of birds that breed on the island and 23 species of plants growing there fall into these categories. Some of these birds, including Piping Plover and Common Eider, are considered to be of global conservation concern.

I had the good fortune of being able to visit Plum Island on two occasions and have circled the island on many occasions. The waters surrounding the island are teaming with life. Seals are present on the shore, no matter the season. The west end of the island has always had multiple Roseate Terns loafing on the rocks as they take a break from hunting the bounties of the Race. In fall migration, every shrub seems to be covered in neotropical migrant landbirds. For some of these birds, including the Blackpoll Warbler, this is the last time they will touch land until they reach the shores of South America.

If Plum Island was privately owned and on the market, we would be going through extraordinary lengths to try to secure funding to bring it into the public estate. But the people – all of us – already own it. To sell this island to the highest bidder does a serious injustice to all of us and to the generations to come. They simply are not making any more undeveloped coastal habitat on Long Island Sound.

Thank you, Senator Blumenthal, for introducing the Plum Island Protection Act and for all of your work helping us to protect this ecological gem. 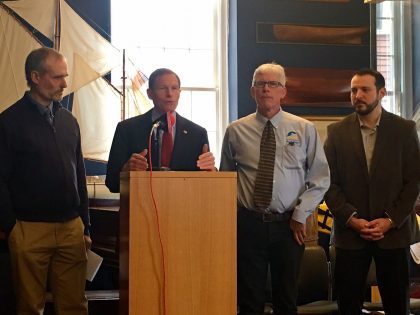 From left, Chris Cryder of Save the Sound, Senator Blumenthal, Patrick Comins, and Louis Burch of Citizens Campaign for the Environment, at the Plum Island press conference. Photo by Alisha Milardo/Connecticut Audubon.