Wednesday, March 13, 2019, 8 a.m.: “Westport-Sherwood Island – 4 Blue-winged Teals dropped into the marsh behind the nature center a few minutes ago.” Reported by Tina Green on the COA’s CTbirds list.

This is a good time to republish Nick Bonomo’s Bird Finder post about Blue-winged Teal from almost a year ago.

by Nick Bonomo
As spring finally takes hold after this year’s particularly long winter, our marshes, both inland and coastal, will really begin to awaken. One of our most familiar and easily-observed groups of birds, the ducks, are in peak migration and can be seen readily in most wetlands. Keep an eye out for this dapper migrant species among the flocks of familiar waterfowl.

What it looks like: A male Blue-winged Teal is truly unmistakable. Its dark blue-gray face and black bill stand in strong contrast with the large white crescent that extends vertically between the bird’s bill and eye. That huge white slash on the front if its otherwise dark face can be seen from a great distance. 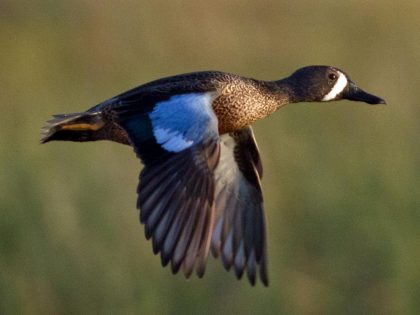 The sides of its breast are specked golden brown and black, while a bright white “hip patch” is obvious on the bird’s side, positioned just in front of its tail. This combination of high-contrast coloration and fine patterning make the male Blue-winged Teal one of our more attractive and easily identifiable ducks.

The female’s markings are much more subtle. Like most female dabbling ducks, she is rather plain brown. There are no obvious distinguishing marks as she swims.

Look for a bird slightly larger than the more common Green-winged Teal with a broad gray bill and a subtle small area of pale feathering at the base of the bill.

Any identification doubt will depart if she flies, as she will flash a powder blue wing patch on her inner forewing that cannot be missed.

The male also shows this trait in flight. Beware that female Northern Shovelers share this blue patch with our teal, but a female Shoveler has a rather large, spatulate orangey bill and is larger in size.

Luckily, at this time of year, females are generally paired with the much more obvious males.

When to look: The Blue-winged Teal is one of our less common migrant ducks, but it occurs regularly in pairs or small flocks during the month of April. We’re at peak season right now.

Where to find it: Any marsh or pond could do the trick, either freshwater or saltwater. Along the coast, you might check the marshes at Milford Point in Milford or Shell Beach in Guilford. Inland, the Portland Fairgrounds in Portland and both Little Pond and Cemetery Pond in Litchfield are reliable for this species.

Conservation status: The Blue-winged Teal is classified as a species of Least Concern by the IUCN Red List. It has a very large population size, breeding as far north as Alaska and wintering as far south as northern South America.

One of Connecticut’s most well-respected birders, Nick Bonomo leads tours for our EcoTravel program. He lives in Wallingford and blogs about his birding experiences at Shorebirder.