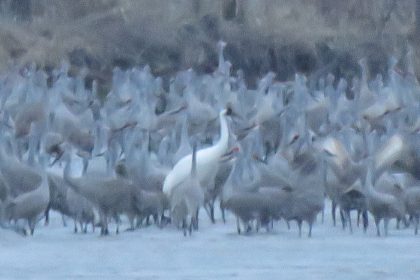 This Whooping Crane sent a charge of excitement through our group. Photo by Jan Hamilton-Sherwonit.

There’s an urban sound to “737 and V.” Don’t be fooled. Here’s what we saw there: a barn, a couple of squat silos, a man killing time as corn shot firehouse-style from a silo into a truck, and 2,000 acres of wetland and flats seething with waterfowl. The view across the treeless flats was endless.

I spent two days last week on an EcoTravel trip to Nebraska, with trip leader Jim Sherwonit, Jim’s wife Jan Hamilton-Sherwonit, and Jay Coles and Betsy Craggs (I met them mid-trip). The Funk waterfowl area was one of the highlights. I’ll get to another below.

At Funk, the best of several viewing spots that day looked east from V Rd. over paddy-like ponds. We ID’d Eared Grebe in breeding plumage from the car and then it was, “Whoa. Look at all those ducks.” The road was unpaved but graded, and we parked near a sinkhole caused by recent rains. Until another small group of birders showed up nearby, no one was around but us.

Jim and Jay set up their scopes. The rest of us scanned with binoculars. Blue-winged Teal. Green-winged Teal. American Coot. There were so many ducks in the middle of the lake that it took work to distinguish the individuals: Lesser Scaup, Canvasback, Redhead. Mallard and Northern Shoveller in abundance. Northern Pintail. On the north edge of the impoundment, Ruddy Duck and Gadwall. American Wigeon. Bufflehead behind us. Canada Goose of course. Flocks of ducks rose in the distance, circled, and settled in another section. Skittish ducks bolted at our appearance.

We looked for Snow Geese, to no avail. The next day, elsewhere, we were to see more than we could count. Jim estimated 10,000 but it could easily have been 20,000. Jan was keeping the trip checklist and hoped for a Red-breasted Merganser. Those might have been the only two misses at Funk.

The temperature that day was in the low 70s. The next day was barely 40 and the wind cut from the north with nothing to get in its way. After a day of birding-by-car we were scheduled for the 6 p.m. Sandhill Crane program and viewing at the Rowe Audubon Sanctuary in Gibbon. We had all seen Sandhills already on this trip. You couldn’t miss them. Flocks of hundreds spend the day gleaning corn from fields near the Platte River. Their calls are as constant as the sound of gulls in summer on the New England coast. 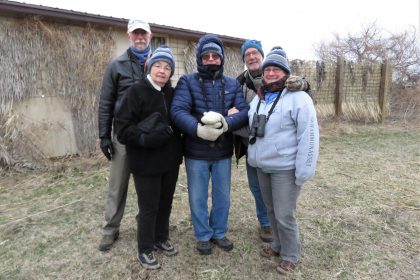 The EcoTravel group outside the blind at the Rowe Sanctuary. Yes, it was that cold. From left, Tom Andersen, Betsy Craggs, Jay Coles, Jim Sherwonit, Jan Hamilton-Sherwonit.

At Rowe, you are shown a short orientation video, and then groups of 20 people are guided to the sanctuary’s three blinds, each about 20 feet from the Platte. You’re there for more than two hours.

The river flows east with hardly a ripple. Across the river and to the east I can see three low buildings, and a long skeleton-like irrigation machine and, farther away, a communications tower. Everything else is matted straw, the silt-gray river, long narrow mud bars, grasses on the far bank, a line of cottonwoods. There’s silence in the blind. We’re all looking through rectangular windows, two feet by four feet. I hear a freight train to the north. A kingfisher flies over the blind from behind, then down river, stops, hovers, dives, flies away.

The cranes are hard to see beyond the trees across the river but small flocks fly closer. They sound like spring frogs, like the roar of a crowd at a stadium. A raucous flock flies upstream, curls back and flies downstream again, the sound moving with the flock. Our guide says, “Now we’re getting some action.”

The urgency intensifies. Long strings of cranes fly high above mid-river. We hear a crescendo like a mob about to riot across the river and a mass of cranes rises and flies across to us, dividing above us. The guide, who has been watching me taking notes, leans to me and asks with a grin, “So how many was that?” Approximately 400,000, I say. At the east end of the blind people are peering out the side window to a field behind us, where the accumulation of cranes looks like a low gray plateau in the dusk. They’re almost ready to move to the river itself.

Word comes from the end of the blind, where Jim, Betsy, Jay, and Jan are stationed: Whooping Crane. It’s like an electric charge through the blind – muffled because one of the rules of the blind is no talking except in whispers. I scan a long thick line of Sandhill Cranes down the river until I find a big white bird, first in my binoculars and then in a scope mounted near the opening. A Whooping Crane, dwarfing the Sandhills it’s with. Perhaps 1,500 yards away.

Daylight fades and Sandhill Cranes settle on the bars upstream and down, filling the gaps between them until the river in front of us is full of cranes standing up to their ankles in shallow water. They are shadows now, barking and crying. The actual estimate is that 600,000 Sandhill Cranes stop here to rest and feed during spring migration.

At last, when the light outside is dim but the blind is dark, it is time to go. I’d be happy with another 10 minutes. We’re guided slowly along the path, back to the parking lot. At the car we can talk in normal voices and I say that I assumed it was one of our EcoTravel group that had first spotted the Whooping Crane. Modesty prevails. And finally Jay Coles, like the others a veteran of many EcoTravel trips, says: “Well, I guess that was me.”

For all of us, of course, it was a life bird.

For more information about all of EcoTravel’s trips, click here.