A new estuary reserve in Old Lyme and Groton 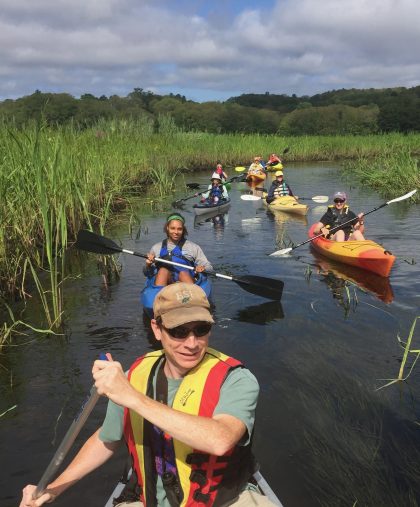 Funding would be earmarked for scientists and others engaged in researching water quality, habitat quality, fish and wildlife, and other topics.

Here are a few basic details:

What is the reserve and why is it significant for conservation?
The National Estuarine Research Reserve would include some of the best wildlife habitat on the Connecticut River estuary and in southeastern Connecticut, including coves, islands, and marshes in Old Lyme. Now under consideration by the National Oceanic and Atmospheric Administration (NOAA), the proposed reserve encompasses the Lord Cove and Great Island Wildlife Management Areas in Old Lyme, and Bluff Point and Haley Farm State Parks in Groton.

The research reserve is a project of NOAA, the Connecticut Department of Energy and Environmental Protection, the University of Connecticut, and Sea Grant.

The inclusion of the Old Lyme areas is significant because the lower Connecticut River is globally important for conservation. The mouth of the Connecticut River and the estuary are unusual if not unique in the eastern United States because, without a big city on its shores, it has remained relatively undeveloped—a vast area of extraordinarily high quality habitat.

What is the reserve’s potential for research and education?
As much as $1 million a year in funding for scientific research and monitoring, education, and stewardship is at stake. The funding would be earmarked for both sections of the reserve, to be used by scientists and others engaged in researching water quality, habitat quality, fish and wildlife, and other topics.

The reserve would also be a site for local education programs such as Connecticut Audubon’s Science in Nature, which has reached more than 75,000 school children in Connecticut.

Why is public support needed?
The federal government, which is providing the bulk of the funding for the project, wants to see that Connecticut residents support the reserve because the state would ultimately manage it. Local support for creating the reserve likely means continued support of the state staffing and carrying out programs there.

Connecticut residents already demonstrated strong interest in the reserve when more than 100 people attended a public meeting about it in November 2018. Connecticut Audubon is urging the public to tell federal officials that local support for the reserve is still high by contacting NOAA directly.