Robert Roy Larsen, former Chairman of the Board and a driving force in Connecticut conservation 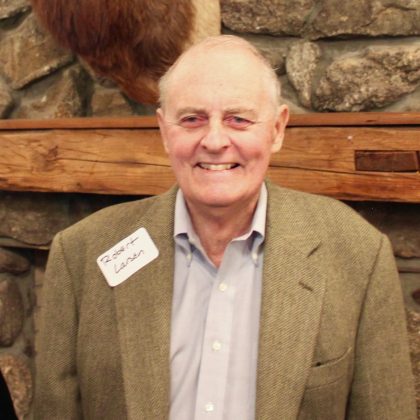 Robert Larsen at a 2016 event at the Center at Fairfield. He passed away on May 9.

May 22, 2019 – The Connecticut Audubon Society is remembering Robert Roy Larsen, a former board president whose leadership at a pivotal time helped transform the organization into the statewide conservation force it is today.

Mr. Larsen, who lived in Fairfield and also served as chair of the Board’s Finance Committee, died May 9 at the age of 87. He continued a family history with Connecticut Audubon that started with his parents, but those who worked with him said his greatest contribution was his vision for expanding the organization.

Milan Bull, Connecticut Audubon’s senior director of science and conservation, said, “He was the driving force that turned us from a small local organization to statewide organization with his finance skills, easygoing way, and very intelligent and encouraging manner.”

Bob Larsen led the board in the 1970s when the organization’s physical presence and influence had not grown far beyond Fairfield and Birdcraft Museum, created in 1914. The organization had established the Center at Fairfield on Burr Street in 1971 and its other regional centers and sanctuaries were years way. Its advocacy efforts in Hartford had just begun in 1974. Membership was a fraction of what it is now, there were few employees, and record-keeping was primitive by today’s standards.

“I think we kept track of the members of the organization in a little file box like my mother kept her recipes in,” recalled Hugh Smith, another former Board president who served with Larsen. “It wasn’t very big and it was very folksy.”

“He had a vision of a statewide organization, not just a little sanctuary on Burr Street in Fairfield,” Smith said. 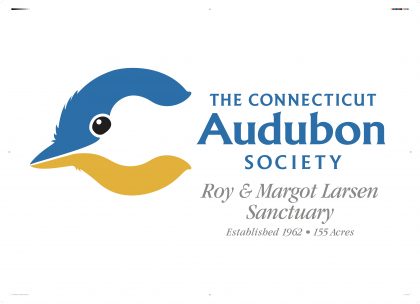 Mr. Larsen’s connection to Connecticut Audubon and his interest in conservation came from his parents, Roy and Margot Larsen. Margot was an avid birder, and Roy was a founder of the Nantucket Conservation Foundation, in which Bob Larsen would eventually take leadership roles.

The Larsens were largely responsible for preserving and extending Connecticut Audubon’s presence in Fairfield.  When I-95 was built in the 1950s, much of the grounds of Birdcraft Museum were condemned for the highway. To replace the land that was lost, the Larsens donated a parcel for Connecticut Audubon’s Center at Fairfield and the 155-acre preserve that surrounds it. Today, the Roy and Margot Larsen Wildlife Sanctuary is one of Connecticut Audubon’s largest and most widely used properties.

Bob Larsen’s own love of the outdoors centered around the water, and sailing shaped his dedication to the environment. He was a member of several sailing clubs, including the Pequot Yacht Club in Southport, where was the rear commodore when Smith was commodore. Larsen devised a plan for acquiring a small fleet of boats, which got more families out onto the water.

“When we’re on our boats, we’re immersed in conservation, and if we didn’t pay attention to our conservation, we’d be out of the boating business,” Smith said.

Though Larsen carried on his parents’ tradition of conservation, he made his own mark as board chair. He earned the respect of his fellow board members with his financial acumen and his even-tempered manner, Bull and Smith said.

“He had an easygoing way about him that led other board members to seek his advice on almost everything. Everybody loved and respected him on the board,” Bull said, adding that Mr. Larsen’s reputation made it easy to recruit board members. “It was quite an honor to be invited to come on the board due to his leadership.”

“One of the things I will never forget about him is that he was very quiet at meetings,” he said. “Everyone would talk, and then Bob would speak. He would sum things up and that was it. He always knew the money side and he was always right.”

Read more about Mr. Larsen’s career and family life in his obituary, here.