At the Coastal Center, the Purple Martins are thriving thanks to diligent management 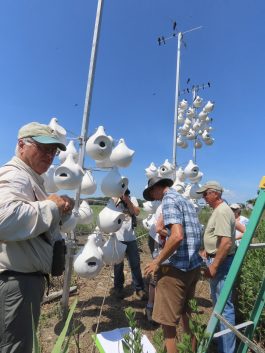 July 10, 2019 – Five years after they were removed from the state’s list of threatened species, Purple Martins continue to thrive at Connecticut Audubon’s Coastal Center at Milford Point, with the number of hatchlings having essentially doubled since 2016.

Purple Martins – North America’s largest swallow – continue to be listed as a “special concern” species in Connecticut. But the dramatic increase shows that population gains are achievable with the kind of careful, diligent management work being undertaken at the Coastal Center and several other important locations in the state.

State wildlife biologists, Connecticut Audubon staff, and a handful of volunteers met at the Coastal Center on Tuesday, July 9, to attach tiny identifying bands to the legs of newly-hatched martins. The color-coded bands will eventually provide information about how the birds move throughout the region and occupy other martin colonies in future years.

Over three hours of work under a canopy on one of the Coastal Center’s observation platforms, the team banded 154 of the 159 birds that have hatched this year (five chicks were too young to band).

The martins nest in a colony of man-made gourds at the edge of the Wheeler tidal marsh, near the Coastal Center’s parking lot. Michael Aurelia, a Connecticut Audubon Board member, works with Frank Mantlik, a member of the Coastal Center regional board, and Markus Bergvind, the Important Bird Area Coastal Ranger at Milford Point, to monitor and maintain the nests each week. This year, Purple Martins nested in 40 of the 71 gourds.

To watch a live stream of the birds nesting inside one of the gourds, click here. 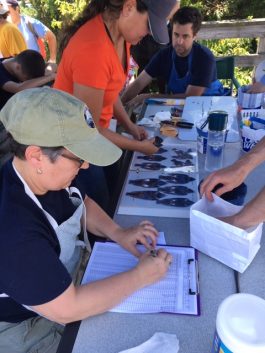 With help from grants from the Connecticut Ornithological Association, Connecticut Audubon has added new gourds at the Milford Point colony in recent years. Patrick Comins, Connecticut Audubon’s executive director, said the extra nesting space probably helped attract new, younger birds from other colonies. As those birds grow older, they get better at hunting and raising chicks, which leads to more nestlings.

The bird-banding session was led by three wildlife biologists from the Connecticut Department of Energy and Environmental Protection – Laurie Fortin, Brian Hess, and Shannon Kearney. They weigh each baby bird (weights typically range from the mid 20s to the 50s, in milligrams), attempt to determine how old each bird is (about seven to 14 days, usually), and afix the identifying tags (orange indicates that the bird was banded at the Coastal Center).

Martins banded at the Coastal Center in previous years have been seen in New York and throughout much of New England.

The Milford Point colony is one the three most important of about 30 throughout the state. In eastern North America, Purple Martins rely almost completely on man-made nests. They need large, open areas to hunt the insects that make up their diet.

Until 2015, Purple Martins were listed as threatened in Connecticut. But the success of colonies throughout the state, and the discovery of colonies unknown to officials, prompted an improvement in its status to “special concern” – meaning that its population is still low, and its range and habitat are restricted, and that it still requires special efforts to maintain populations.

Connecticut Audubon focused on Purple Martins and other birds that hunt insects while flying in its 2013 Connecticut State of the Birds report, “The Seventh Habitat and the Decline of Our Aerial Insectivores.” 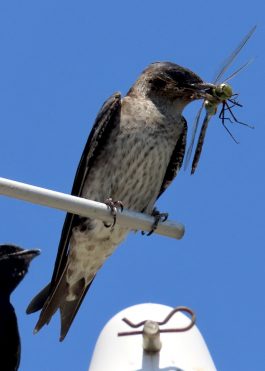 A Purple Martin about to eat a dragonfly. Connecticut Audubon photo by Patrick Comins.

In an article in the report, John Tauntin, executive director of the Purple Martin Conservation Association, noted that continent-wide the martin population has been stable for the last half-century. But the population in the states and Canadian provinces bordering the Great Lakes, and in New England, has declined significantly, for reasons that aren’t clear.

“Regardless of the reasons for the declines,” he wrote, “recruiting more people to provide high-quality, well-managed housing is key to restoring Purple Martin housing.”

Among the other successful colonies in Connecticut are those at Sherwood Island and Hammonasset Beach state parks. Connecticut Audubon erected martin gourds last year at its Deer Pond Farm preserve in Sherman and although martins have visited none have nested there yet.