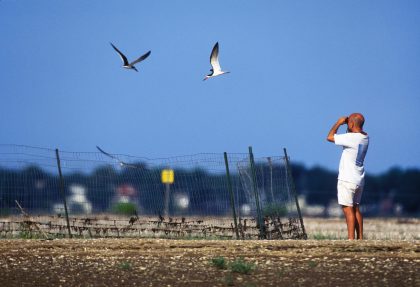 Watching Black Skimmers on the wing. Photo by Bob MacDonnell.

My 2 Black Skimmers [were] back again feeding in my cove around the Veterans Park marina lights at 4am. I have been observing this fairly unusual time to feed for the last 6 years with them. They appear virtually at anytime. I live across the street with my window open, and can hear them calling, which alerts me they are back feeding. I walk to my front porch, then to the street or the park to watch them at night. I have filmed them at night in the past.

Sent from my iPhone

Several times over the past month we’ve seen notices like that from Ian Devlin on the Connecticut Ornithological Association’s birding listserve  – Black Skimmers feeding in the wee hours in Norwalk Harbor. Skimmers are amazing-looking and are uncommon enough to be worth searching for, and while you don’t have to be up at 4 a.m., you do have to pick the right spot at the right time.

This summer those spots seems to be the Milford Point Coastal Center and elsewhere near the mouth of the Housatonic River, and the greater Norwalk-Westport waterfront.

Black Skimmer has been a subject of our Bird Finder twice over the last six years. We thought it would be helpful to republish one of those, by Milan Bull. 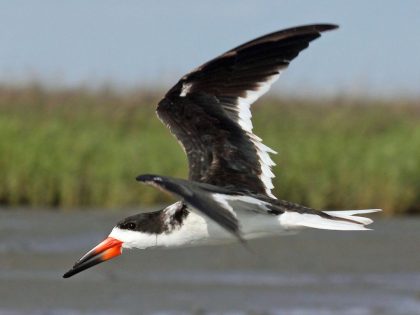 by Milan Bull, Senior Director of Science and Conservation

What it looks like: A large, black and white, tern-like waterbird, the Black Skimmer has a distinctive large red bill. Typically skimmers fly low over the water with the lower mandible cutting the surface hoping to catch small fish. Skimmers are the only birds with the lower mandible longer than the upper. When at rest, they often group together on sand and gravel bars, their black backs and white underparts visible at long distances.

Where to find them: Currently on most days, there are several Black Skimmers resting on the sand bars at our Milford Point Coastal Center, best visible through a spotting scope, but identifiable with good binoculars. They can also be found at Sandy Point, in West Haven, and elsewhere along the coast of Long Island Sound.

How to find them: Scan the offshore bars for a small group of larger black and white birds sitting on the sand. Skimmers are fairly good-sized birds, about 17 inches long, and are generally grouped together.

Interesting facts: Although skimmers can be active during the day, they are most active at dawn and dusk when small fish venture near the water’s surface.

Conservation status: Black Skimmers are listed by the IUCN as a species of Least Concern. However, rising sea levels may impact the beaches and sand bars that they require for nesting in the future. The main threat to skimmers is development or other loss of their beach-nesting habitat, since they nest on exactly the kinds of beaches that people like to vacation on. In addition to habitat loss, skimmer nests can be destroyed by roaming dogs and by vehicles that are allowed to drive on beaches.

2019 update: This eBird map shows where Black Skimmers have been seen in recent weeks. 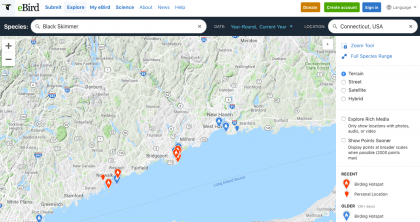