Working for birds & people: Insects did their damage to Connecticut’s forests but created a chance for big improvements in the process 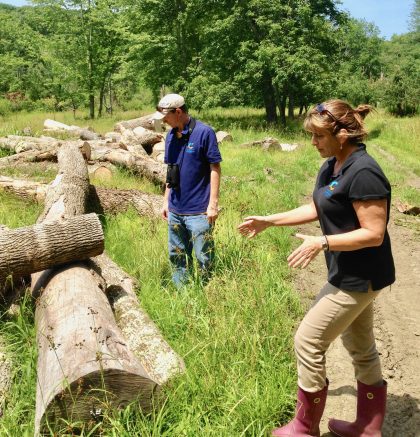 July 25, 2019 – It’s easy to see the damage that invasive insects have done to Connecticut’s woods. But if you want to see ongoing examples of how to make the best of that unfortunate circumstance, they’re happening at two of our preserves.

Infestations have ripped through Connecticut’s forests. For three years, gypsy moths ate every leaf in sight across big sections of oak woods east of the Connecticut River, and when drought followed the trees succumbed. Emerald ash borers in the meantime have been eating the inner bark of northern white ash. You’ve probably seen the results: for a few years in a row a healthy-looking ash tree seemed to be putting out fewer and fewer leaves, until one year it put out none at all. It was dead.

Our sanctuaries haven’t been spared. However at Trail Wood in Hampton and Deer Pond Farm in Sherman the situation has given us a chance to revive and improve several dozen acres of woodlands, thanks to key grants, widespread support among our members and supporters for on-the-ground conservation work, and hard-working volunteers.

The improvements will attract birds, small mammals, frogs, snakes, turtles, and pollinators such as native bees and butterflies. And if you visit, you’ll see how your support has created the opportunity to make the best of the situation through carefully-planned habitat improvement projects.

Many of the trees killed by the infestations were near trails open to the public, which is another really important reason for taking them down: the safety of visitors. Sarah Heminway, who as director of Connecticut Audubon’s Northeast Corner Programs oversees Trail Wood, and Cathy Hagadorn, director of Deer Pond Farm, emphasized that the dead trees had to be cleared to minimize the risk of a limb or trunk falling on a hiker.

But Sarah and Cathy, working with Executive Director Patrick Comins and other staff, saw a bigger opportunity.

The Deer Pond Farm project encompasses about five acres of the 835-acre preserve. Over two or three years, the dead trees will be hauled away, invasives uprooted, and native shrubs, grasses, and flowers planted – all of it designed to improve an area already rich in plants and wildlife.

Much of the work is being funded by grants from the Robert F. Schumann Foundation and the Hollis Declan Leverett Fund, supplemented by donations from Connecticut Audubon’s supporters. A group of yeoman volunteers has contributed much of the labor, working with our staff – Deirdra Wallin, Jim Arrigoni, and Stefan Martin – to pull out barberry, mugwort, and Canada thistle.

The project area is an easy walk along the Cathedral Trail from the Deer Pond Farm parking lot. At the base of a hill, the woods open into several clearings and a small plantation of white pines. The improvement project is underway now and many of the white ash trunks remain stacked along the trail. You’ll see invasive barberry uprooted and left in small piles.

Two plots within the three acres have been planted in grasses like sorghum and millet, to produce seeds for the preserve’s year-round resident birds and for fall migrants. A wet meadow covers maybe half an acre between the Cathedral Trail and a shrub swamp; the plan is to plant wildflowers that thrive in moist soil – great blue lobelia, Joe pye weed, boneset, swamp milkweed, and cardinal flower among them.

Native shrubs, also chosen for their value to wildlife, will include viburnum, blueberry, winterberry, dogwood, and sumac.

During a walk through the older forest, it’s a delight to come upon the clearings and to see and feel and hear the difference – sunlight, wildflowers, grasses bending in the breeze. Goldfinches and American Redstarts calling, an Eastern Wood Pewee feeding its young. The project benefits wildlife but it’s also designed for visitors to enjoy.

Volunteers and staff are working to make Deer Pond Farm even better for animals and plants, and for the people who visit. Connecticut Audubon photo by Cathy Hagadorn.

At Trail Wood the gypsy moth damage was more extensive than the emerald ash borer damage at Deer Pond Farm – so extensive, in fact, that we made the decision, in the winter of 2017-18, to close the preserve and remove the dead trees (the oaks were valuable and we sold what we could as timber).

Trail Wood, which covers 168 acres, was the home of Edwin Way Teale, the naturalist and author, and his wife, Nellie. The best way to see what’s happening there is to walk the trail that leads north from behind the Teale House. Signs on the preserve will help direct you.

You’ll see large openings in the woods near Hyla Pond and overlooking Beaver Pond. The foresters hauled out the trunks of the dead trees but left limbs and branches behind. Salamanders and bugs will thrive in and under the downed wood, and the wood itself will break down and enrich the soil. 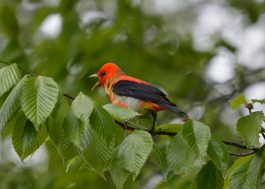 Sassafras has already sprouted. Most stumps were sheared almost to ground level, and here and there a spray of oak saplings has sprouted as well, along with blackberry and raspberry. Sanctuary manager Andy Rzeznikiewicz will be vigilant about keeping invasive weeds at bay.

Andy will be working to transform the forest into a habitat for the bird species that are declining fastest in New England – shrub and young-forest dwellers such as Blue-winged Warblers, Eastern Towhees, Chestnut-sided Warblers and Prairie Warblers. Forest-dwelling birds such as Wood Thrush and Scarlet Tanager are using the clearing to forage. And nearby just last week, in a habitat improvement area supported by the Hollis Declan Leverett Fund, summer day campers at Trail Wood were treated to a stunning view of a male Indigo Bunting, one of the species the work is designed to attract.

At Trail Wood and Deer Pond Farm, the work is a process. Wildlife and human visitors are benefitting now, and will continue to do so well into the future.