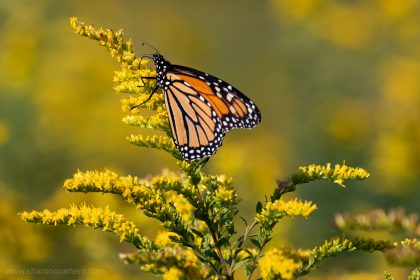 Monarch on goldenrod, by Sharon Cuartero.

September 30, 2019 – Last week Carol Kratzman, the teacher-naturalist at the Coastal Center, told me she would be tagging monarch butterflies in a couple of days and invited me to come along.

I thought it would make a good story so I emailed Jill Dion, the editor of Hearst’s Milford Mirror. She responded with a quick “Thanks Tom.” When I got to the Coastal Center around noon on Thursday, Jill wasn’t there but photographer Brian Pounds of the Connecticut Post/Hearst was.

He told me they had already caught and tagged one monarch.

I was prepared to take notes but Carol handed me a butterfly net instead. We searched the pollinator garden: a couple of monarchs, a painted lady, a common buckeye. I watched Carol’s technique. When she found a monarch feeding on a flower, she simply dropped the net over it. Then she grabbed the toe end of the net and pulled up, which gave the butterfly room to let go of the flower. Then she lightly grabbed the net below the butterfly with her other hand and carried it to a nearby bench.

She had a clipboard and an envelope with tiny round adhesive tags, like tiny name tags for a party. Like the leg bands that bird banders affix to birds, each had an identifying number. Her technique was to lift a side of the tag and slip the tip of a toothpick under it, like a miniature flag on a miniature flag pole, then lift.

She took the butterfly out of the net and asked me to apply the tag. I told her that my manual dexterity was poor. “It’s easier that you think,” she said. She gently held the butterfly so the back of one wing was facing me. She touched a spot on the wing and directed me to place the tag there. I did, and I rolled the toothpick out from under it. Then we freed it. She entered the data on a sheet of paper, so she could send it later to Monarch Watch. If someone finds the butterfly and reports the number on the tag to Monarch Watch, the information gets entered into a database to help track the migration route of this vulnerable species.

Melina Giantomidis, Connecticut Audubon’s Osprey Nation coordinator, showed up. We invited her to help. The four of us walked out to the dunes, where it was hot and breezy. Carol told us to look for monarchs in the goldenrod and then catch them. I felt guilty about walking through the dunes, but I trod lightly. Monarchs were, if not quite abundant, than at least common. We easily caught and tagged eight.