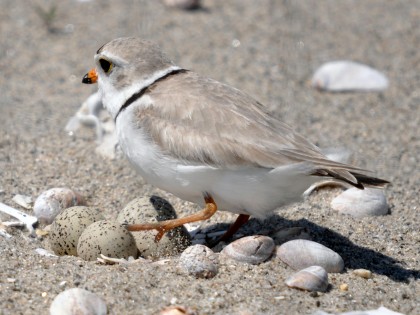 October 10, 2019 — It was less than a month ago that a study in the journal Science reported that North America’s bird population had plummeted by 30 percent since 1970. Now another new study indicates that because of climate change the next 50 years and longer might be even more bleak for birds.

The study, released today by the National Audubon Society, “projects that hundreds of bird species across North America are likely to drastically shift their ranges in the decades ahead in response to rising temperatures and other threats from climate change,” according to the New York Times. “The report raises the prospect that many bird species could struggle to cope as warming forces them into unfamiliar territory or shrinks their existing habitats. And it illustrates how thoroughly the avian world as we know it may be remapped if humans continue pumping greenhouse gas emissions into the atmosphere.”

A study released in mid-September by the Cornell Laboratory of Ornithology, the American Bird Conservancy, and other experts reported that since 1970, bird populations in North America have dropped by 29 percent; there are now approximately 2.9 billion fewer birds in North America than there were 50 years ago.

Among the birds at risk to climate change are Piping Plovers, a federally threatened species that nests only on beaches, which are vulnerable to sea-level rise. About 60 pairs nest in Connecticut, watched over and protected by the Audubon Alliance for Coastal Waterbirds.

Last month Connecticut Audubon’s policy, education, and conservation staff compiled a list of six things you can do to help birds here in Connecticut. It is of course just as relevant now as it was then.