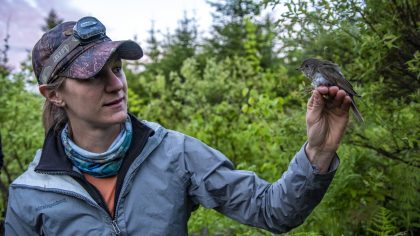 Bicknell’s Thrush was among the species detected by Motus antenna in Sherman funded by a FirstLight grant. A second antenna is now up at Shepaug Dam in Southbury.

November 11, 2019 – Kibby Mountain, bristling with balsam fir and owned by a giant timber company, sits near the northern tip of Franklin County, Maine, about six miles from the Quebec border and three hours and 15 minutes by car from Orono, home of the University of Maine. In other words, smack in the middle of nowhere.

It was near Kibby Mountain, on June 17, 2019, that UMaine Professor Amber Roth watched one of her graduate students, Kaitlyn Wilson, capture a Bicknell’s Thrush and fit it with a Motus nanotag. The thrush, a male, stayed in the area, pinging Roth’s and Wilson’s Motus antenna over and over, until October 4.

Bicknell’s Thrush is globally vulnerable to extinction, and very difficult if not impossible to identify in the field, being all but indistinguishable from Gray-cheeked Thrush. That wasn’t an issue in Sherman though. Nobody there saw the bird. It flew past at night, within the 10-mile range of the Motus antenna installed at Deer Pond farm a year ago.

Officially “UMaine Migration Ecology (#266) ID #35581,” it was the 12th bird and eighth species detected at Deer Pond Farm over that period.

The Motus antenna was installed thanks to a matching grant from FirstLight Power. Several weeks ago a second antenna went up, at FirstLight’s Shepaug Dam in Southbury. Donations from Connecticut Audubon’s members and supporters are complementing FirstLight’s grant by helping to fund the staff time and ancillary expenses needed to install, monitor, and maintain the equipment. 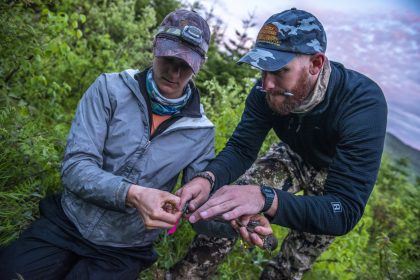 Kaitlyn Wilson and Alex Barnes of UMaine place a Motus transmitter in June on the Bicknell’s Thrush that passed over Deer Pond Farm in October. Photo by the University of Maine.

“This is very exciting news,” Connecticut Audubon Executive Director Patrick Comins said of the thrush. “Bicknell’s is the subject of much research to try to prevent extinction. Although the Deer Pond Farm detection is only one data point, it’s bound to be an important one. It really shows the value of the Motus antenna system.”

The lightweight Motus nanotags are tiny transmitters that let researchers track the movements of birds across thousands of miles. All the tags use the same frequency, so any tag can be detected by any of the 350-plus antennas in North America. The Motus maps and data are available to researchers throughout the world.

The eight species detected at Deer Pond Farm include others of conservation concern—which is not a surprise because researchers tend to focus on at-risk species.

Three Chimney Swifts—two from Quebec, one from Nova Scotia—flew by, on August 5, August 11, and August 24.

A Sora—not uncommon but secretive and difficult to study—flew past on on October 3, bearing a tag attached in April in the wild-rice marshes of Maryland. Three Rusty Blackbirds were detected on November 2, bringing the total number of detections in the first year of operation to 15.

“We could not have hoped for a more interesting or significant array of species,” Comins said. “This puts Deer Pond Farm on the map, literally and figuratively, for some of the most important research being conducted in the east. I want to make sure FirstLight Power and Connecticut Audubon’s members know how much we appreciate their generosity. It’s really going to make a difference for conservation.”

The new antenna at Shepaug Dam hasn’t detected any birds yet. But the expectation is that it will be just as productive and useful as the Deer Pond Farm antenna in providing information to international researchers on bird movements through the area. Combined, the two antennas cover a big area, including parts of Patterson and Brewster, New York, and Kent, Washington, Beacon Falls, and as far south as Easton and Ridgefield, Connecticut.

“FirstLight is committed to helping protect our environment, so we were very excited to be able to help support Connecticut Audubon’s continued development of the Motus system.” FirstLight’s spokesman Len Greene said. “We believe that Connecticut Audubon’s efforts will help researchers better understand and conserve migratory animals that are critical to our local environment.”

You can find a list of all the Deer Pond Farm detections, with links to maps and more informaton, here.

This map shows the route taken by the Sora that passed Deer Pond Farm in October.

Professor Roth said the Bicknell’s Thrush that migrated past Deer Pond Farm was first captured by Kaitlyn Wilson in June 2018, about a year after it hatched, and was part of a VHF-radio telemetry study. The land is owned by the Weyerhaeuser Company. It had been clear-cut, left to regenerate, and is now dominated by young balsam fir—exactly the kind of habitat Bicknell’s needs.

A year later, on a day when Roth and a UMaine photographer happened to be in the field with her, Wilson captured the thrush again, and fit it with the Motus nanotag. Their research is designed to help land managers in Maine write best management practices so Bicknell’s Thrushes continue to have high-quality habitat amid timber industry activity.

For a species living on the edge, that help may prove essential. Birds of North America Online explains:

“Bicknell’s Thrush inhabits areas that humans do not. The species is found exclusively in remote, inhospitable montane and maritime forest habitats, and its penchant for dawn and dusk activity underscore its status as one of the most reclusive breeding birds in North America. It is also among the most rare and, possibly, most threatened.”

It breeds only in high elevations of New England and New York (Eugene Bicknell discovered it in 1881, on Slide Mountain in the Catskills), and in Quebec and Nova Scotia, including in maritime forests. It winters in the Dominican Republic, Haiti, Cuba, Jamaica, and Puerto Rico.

That’s where the bird was heading when it passed Deer Pond Farm on October 10. Songbirds generally have short lives and hazards are numerous. But Bicknell’s Thrushes are known to return to the same location to nest. With luck, it will be back on Kibby Mountain next June.