Connecticut State of the Birds 2019, an Introduction 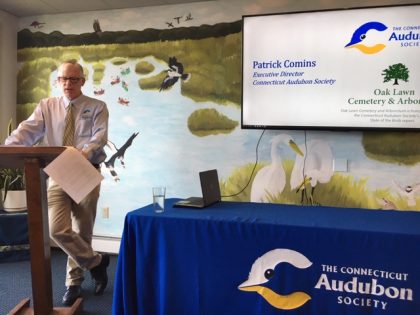 Executive Director Patrick Comins welcomes the audience of 50 members and guests at the 2019 State of the Birds event. Photo by Frank Mantlik.

The following are welcoming remarks by Executive Director Patrick Comins at the 2019 State of the Birds release event, on Thursday, December 5, at the Milford Point Coastal Center. In a few paragraphs, the remarks summarize the 14-year history of State of the Birds and what Connecticut Audubon has tried to accomplish with it.

This year we are happy to announce that for the first time Connecticut State of the Birds has a sponsor, Oak Lawn Cemetery and Arboretum, in Fairfield. Oak Lawn shares our commitment to bird conservation. Its 100 acres includes more than 60 acres that are preserved for wildlife and opened for nature walks.

Over the years Connecticut State of the Birds has delved into the complexities of preserving forest birds and aerial insectivores.

It has shined a spotlight on the importance of getting children outdoors and into nature. That particular report established Connecticut Audubon as the leader in outdoor science-based education and led to the creation of our award-winning Science in Nature program.

State of the Birds has looked at the issues of habitat management and habitat fragmentation.

It drew broad attention to the loss of shrublands and the decline of the many species that rely on them. And in doing so it laid the foundation for our own shrubland restoration projects on five sanctuaries.

It publicized the peril faced by birds that nest in tidal marshes, which you’ll hear more about today.

It sounded a call to action to support and participate in the Connecticut Bird Atlas, and led to Connecticut Audubon becoming a lead sponsor of the project. And it highlighted the importance of the state’s urban areas to bird conservation.

This transformation looms even as Long Island Sound has benefited from three decades of unprecedented cooperation and investment in Connecticut’s coastal environment. Water quality has improved. Wildlife habitat has become a focal point of attention and work. Awareness of the Sound as a critical part of the region’s economy and environment may be at a peak.

And yet the Sound is changing. The report discusses how it has improved, how it’s changing, what needs to be done, and what remains worrisome.