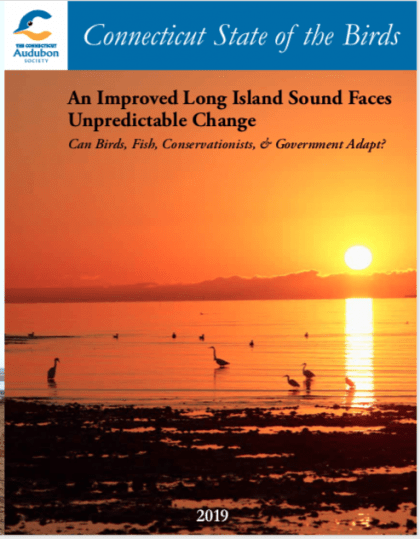 Read coverage of the report in the December 5 Hartford Courant. Here.

December 5, 2019—Water quality in Long Island Sound is as good as it’s been since before the height of the industrial age. And yet the Sound’s most important habitats and its wildlife, including birds, are on the edge of major, hard-to-predict changes.

That’s the central finding of the Connecticut Audubon Society’s annual Connecticut State of the Birds report, released today at the organization’s Coastal Center at Milford Point.

The very location where the report was released is one example: half of the 650 acres of marshland at Milford Point could be lost to a six-foot rise in sea level within 80 years, computer modeling indicates. Other potential effects based on the same model include extinction of the Saltmarsh Sparrow within 40 years.

Each member of the Connecticut Audubon Society receives a copy Connecticut State of the Birds in the mail. PDF’s are available to the general public after January 1.

“A little more like Chesapeake Bay”
This transformation looms even as Long Island Sound has benefited from three decades of unprecedented cooperation and investment in Connecticut’s coastal environment, the report’s authors note. Wildlife habitat—an afterthought for decades as cities and highways expanded—has become a focal point of attention and work. Awareness of the Sound as a critical part of the region’s economy and environment may be at a peak.

“By most measures the Sound is vibrantly healthy,” writes Patrick J. Lynch, a Connecticut Audubon Board member, in the report’s introduction. “Thousands of species live in or near it, and hundreds more travel into it from the ocean.”

And yet, Lynch writes, “The Sound has been changed by the warming environment, and every year it becomes a little more like Chesapeake Bay and less like the chilly lobster-filled waters we used to know.”

Patrick Comins, Connecticut Audubon’s executive director, said that years of good, positive attention and action has brought the Sound back from the brink of environmental disaster.

“But the Sound still faces unpredictable changes,” he said. “There’s a reason we titled the report’s recommendations, ‘Pass Laws, Increase Funding, Approve Plans, Do Everything Possible and Involve Everyone.’ Long Island Sound is such a big, important ecosystem that its future good health is essential—and yet its future depends to a great extent on how we as a society respond to the threat of climate change, which is why we say ‘involve everyone.’ “

A New Sponsor
This year’s report is Connecticut Audubon’s 14th State of the Birds, published annually to help set the state’s conservation agenda. The 2019 report was sponsored by Oak Lawn Cemetery & Arboretum, in Fairfield.

As the report notes, the effects of rising tides and warming waters can already be seen: 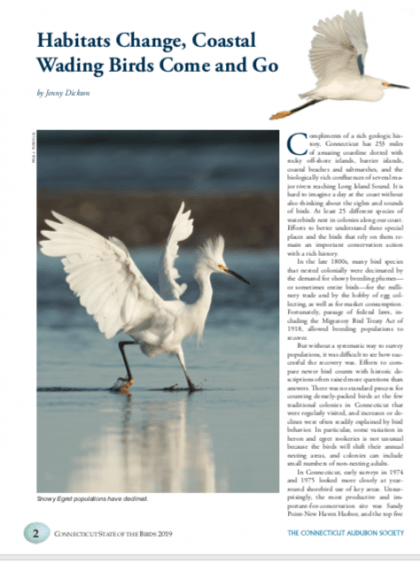 Recommendations
Though sea-level rise is inevitable, the report’s authors conclude, its worst impacts may not be. Connecticut Audubon calls for an all-out effort to identify and protect lands that abut the Sound’s tidal marshes, to provide room for the marshes to migrate.

Among the report’s other recommendations:

The report was written by some of the region’s foremost experts on Long Island Sound and its wildlife and habitat components. From the Connecticut Department of Energy and Environmental Protection, Jenny Dickson wrote about coastal wading birds. Despite natural shifts in populations during 40 years of counting, she writes, overall population trends for Great and Snowy Egrets have declined. Black-crowned Night-Herons have increased in number since the early survey days and have also moved into smaller habitat patches along the coast.

David Kozak and Min Huang wrote about sea level rise and the computer modelling being used to predict how it will change the Sound’s marshes—a question not of whether, but of how much, with results ranging from declines in populations of certain species to outright extinction.

Ana Paula Tavares of the National Audubon Society wrote about forage fish and their importance to the Sound’s birds, highlighting a positive discovery: with proper management, we may be able to circumvent an irreversible food source loss for seabirds that depend on the Sound. Cornell University’s David Winkler wrote about research he’s conducting on the Tree Swallows that roost near the mouth of the Connecticut River. Kim Lutz of The Nature Conservancy discussed the importance of the Sound’s watershed, which extends throughout New England and into Canada, and how the forests that once bordered and buffered the river are among the rarest and most threatened.

The report also features shorter articles by Leah Lopez Schmalz of Connecticut Fund for the Environment/Save the Sound (on hypoxia and water quality); Judy Benson of Connecticut Sea Grant (on the Blue Plan); Mark Tedesco, director of the U.S. EPA’s Long Island Sound Study office (on habitat preservation and restoration); and Jamie Vaudrey of the University of Connecticut (on the National Estuarine Research Reserve).