Connecticut Audubon calls for a ban on horseshoe crab fishing 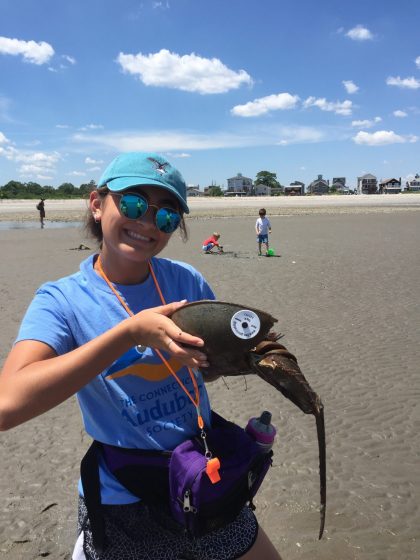 A Connecticut Audubon camp counselor at Milford Point holds a horseshoe crab that had been captured and tagged by Project Limulus volunteers.

Legal harvesting as well as poaching have contributed to a steep population decline. Horseshoe crabs are in peril in Long Island Sound, and so are the birds that rely on their eggs for food.

For additional coverage, read Prof. Jennifer Mattei’s letter to the editor to the Connecticut Post/Hearst

February 17, 2020 — The Connecticut Audubon Society is calling on state officials to ban the harvest of horseshoe crabs in Connecticut and to increase law enforcement efforts to curtail illegal horseshoe crab harvesting.

Horseshoe crab populations have been in decline in Long Island Sound and elsewhere for at least 15 years, jeopardizing these ancient creatures themselves while also imperiling the many species of migratory shorebirds that eat the horseshoe crabs’ protein-rich eggs.

In written testimony to the state Department of Energy and Environmental Protection, Connecticut Audubon Executive Director Patrick Comins noted that state efforts to limit the harvest have failed to stop the population decline.

Last year the Atlantic States Marine Fisheries Commission, which sets quotas for commercial fishing, determined that the region’s horseshoe crab population was in “poor” condition. In response, the CT DEEP is considering changing the state’s horseshoe crab regulations and will hold a public meeting on the issue at 7 p.m. Thursday, February 20, at its Marine Headquarters, 333 Ferry Road, Old Lyme, (read the public notice here and the meeting notice here).

Horseshoe crabs – which are harmless to humans and largely docile – generally thrive in shallow coastal waters, where they live in marshes and bays. They emerge from the sea in late spring and early summer to lay their eggs. Shorebirds, in particular the Red Knot, time their migration to their northern breeding grounds to coincide with the horseshoe crabs’ egg-laying.

The drastic drop in the number of horseshoe crabs in Long Island Sound and especially along Delaware Bay, has led to a near collapse of the population of Red Knots, which recently were listed as threatened under the federal Endangered Species Act.

“Red Knots used to be fairly common on the beaches at Milford Point, and at Sandy Point in West Haven,” Comins said. “No longer. Their numbers have dropped far enough that in recent years sightings have been limited to a handful. Sadly, a Red Knot on our beaches now is a noteworthy occasion.” 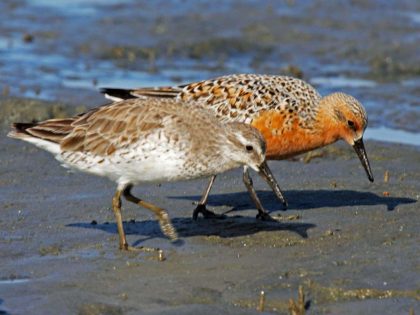 Federally-threatened Red Knots depend on an abundant supply of horseshoe crabs eggs for survival.

Horseshoe crabs are harvested commercially for use as bait in the eel and whelk/conch fisheries. The season in Connecticut runs from May 22 to July 7, although horseshoe crab fishing is banned in Milford, Stratford, West Haven, and Westbrook. The CT DEEP has issued only 12 licenses, with no plans to issue more.

Connecticut Audubon’s call for a ban echoes that of the state’s leading horseshoe crab expert, Prof. Jennifer Mattei of Sacred Heart University in Fairfield. Mattei and a team of students and volunteers, working under the name of Project Limulus, have been studying the state’s crabs for more than two decades.

Based on her observations and those of dozens of Project Limulus volunteers over the years, Mattei estimated that in addition to the legal harvest, thousands of horseshoe crabs are illegally harvested every spawning season in Connecticut.

The result of the legal and illegal harvests is a near-collapse of horseshoe crabs.

In her testimony to the CT DEEP, Mattei wrote: “The density of spawning horseshoe crabs is so low that the females cannot find mates and therefore this population is not reproducing at its maximum potential. The density of spawning horseshoe crabs in Long Island Sound is so low that shorebirds do not have the eggs as a food resource…. The overharvest of this species in Connecticut and New York has resulted in the ecological links to shorebirds and fish to be broken.”