Habitat management at the Haagenson preserve 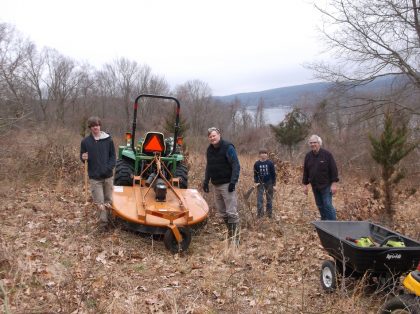 Volunteers working at the Haagenson preserve. Photo by Andy Rzeznikiewicz.

March 25, 2020 — Since last fall, a small group of neighbors and I have started a habitat rehabilitation project at the Harlo N. Haagenson Preserve, 137 Creek Row, East Haddam.  We first cut all the trails back from the encroaching invasive bushes.

We’ve been cutting many of the invasive bushes and vines that had — autumn olive, multiflora rose, privit, and burning bush — filled in the meadow at the scenic overlook.

I also dropped numerous dead and dying ash trees that were blocking the view of the Connecticut River.  The trees are dead and dying from the non-native invasive insect called the Emerald Ash Borer, and from bittersweet vines.

From the vista you can now see the bridge that crosses the river by the Goodspeed Opera House.  As we were taking a break the other day, we watched a Bald Eagle as it flew down the river. 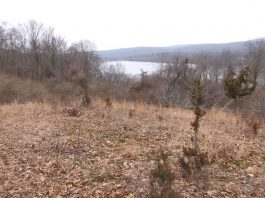 The view of the Connecticut River.

I’d like to thank Dirk Plas and his large tractor for helping push all the cut material out of the meadow and helping cut back the invasives along the trails.