Edited from a version published November 2016. Video by Gilles Carter.

by Andy Rzeznikiewicz, Sanctuary Manager, Center at Pomfret
What it looks like: A mostly blue-colored bird with a large bill and a tufted crest on its head. The males have white and blue on their neck and breast, while the females have an additional reddish-brown belly band. 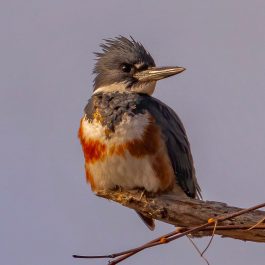 The kingfisher is one of the few bird species where the female is more colorful than the male. Its presence is often known by the distinctive rattle call it makes while flying.

Where and how to find it: Belted Kingfishers frequent streams, rivers, estuaries, ponds and other relatively clear waterbodies, which they hunt over. They often sit motionless on a snag or wire looking for prey in the water. They feed mainly on small fish, crayfish, and amphibians. They sometimes hover-hunt as well over the water, then dive into the water to snatch their prey.

They are found throughout Connecticut year-round, where ever there is open water. Belted Kingfishers dig a nesting burrow into the side of a vertical bank, usually along a river or stream. The burrow can be up to eight feet long. They will also make burrows in gravel banks.

Interesting facts: Some kingfisher are migratory and others stay year round. The nestlings have acid stomachs with allows them to digest fish bones and scales.

At our Center at Pomfret, one or two frequent the beaver pond across from the nature center. But it’s worth checking along any stream or river.

Conservation status: Least concern. It’s found over a wide area of the country, although in Connecticut it seems to be declining and harder and harder to find.