Edited from a version published in August 2015. Video by Gilles Carter.

by Greg Hanisek
The long-popular reference to a “miniature Mockingbird” holds up pretty well. Shape and tone are reminiscent of the big mimid, although the gnatcatcher lacks the white wing markings. But keep miniature in mind. This is a small, slender bird in the warbler size category.

Its thin bill and long tail give it a characteristic shape that makes it identifiable even when silhouetted high in a tree. In good light the blue part of blue-gray is evident on the male, as are the white outer tail feathers on the otherwise black (and very mobile) tail. Also note the thin white eye ring.

Where To Find It: Gnatcatchers are birds of lowland deciduous woods, often found in riparian habitats. They’re widespread breeders in Connecticut but least common in upland woodlands. They’re common north through Massachusetts, following the coast and valleys into the three northern New England states but disappearing in northern Maine. They have been undergoing a northward range extension. 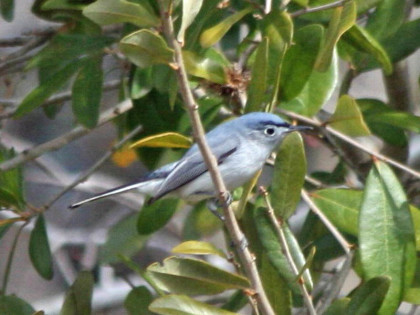 How To Find It: Gnatcatchers often announce their presence by their distinctive and persistent call notes, usually rendered as a thin, querulous “spee” or “spee-spee-spee.” They’re very active, so a call note should lead quickly to a quickly moving bird.

Migrants return to Connecticut in mid-April from wintering grounds in the southern U.S., Mexico and Central America. In passage they’re usually found in the same habitats they’ll occupy in the breeding season. In fall they’re on the move in August and early September, a time when many passerines quietly slip through places that are full of birdsong in May.

Noteworthy: Arthur Cleveland Bent, in his Life Histories of North American Thrushes, Kinglets and Their Allies, writes: “Dr. Herbert Friedmann (1929) recorded the gnatcatcher as ‘a not uncommon victim of the cowbird and in some places a fairly common one.’ It must indeed be the smallest North American species thus victimized.”

Greg Hanisek is a retired journalist who still writes a weekly nature column for the Republican-American newspaper in Waterbury. He is editor of the Connecticut Warbler, the quarterly journal of the Connecticut Ornithological Association.