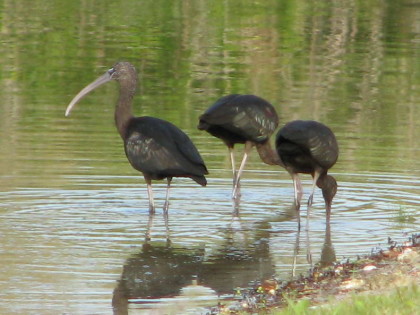 Glossy Ibis have returned to Connecticut from their wintering grounds and big flocks have been seen feeding together. One, in Madison, included 225 ibises; another gathers in Clinton.

This account of Glossy Ibis is edited from June 10, 2015 Bird Finder

By Nick Bonomo
Ibises are a group of nearly 30 species of distinctive wading birds that occur worldwide. Their cultural significance can be traced back to ancient Egypt, where the local species was drawn in hieroglyphics to represent a god. Here in Connecticut we commonly see one species of ibis, the Glossy Ibis, which occurs locally along the coast during the summer season.

What it looks like: The Glossy Ibis is a medium-sized long-legged wading bird that is overall brown in color and has a long, downcurved bill. When observing it closely, one will see that there is a lot more to this bird’s appearance than may first meet the eye. Adults have two thin lines of pale blueish facial skin located above and below the eye. In good lighting conditions, iridescent purples, reds, and maroons can be seen on the body of the bird.

Where to find it: This species is a local breeder along our coastline. It nests communally in heron rookeries that are located on small islands. However, these birds are much more easily seen feeding in coastal salt marshes such as Barn Island WMA in Stonington or Hammonasset Beach State Park in Madison.

When to look: Glossy Ibis arrive in April and can be seen throughout the summer until most depart in August-September.

Keep an eye out for: The closely-related White-faced Ibis, a species of central and western North America, is slowly expanding its range to the north and east. This has led to an increase in sightings in Connecticut, though they are still quite rare. They look a lot like Glossy Ibis but differ in a few ways. They show a broad white band around the face and eye, red facial skin, and a red iris.

Conservation status: The Glossy Ibis is the most widespread ibis species in the world, occurring across the globe, and is listed as a species “of least concern” by the IUCN.