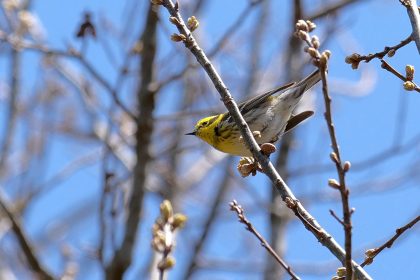 April 20, 2020 — For that portion of the Connecticut birding world that chases after rarities, word of a Townsend’s Warbler in Hartford was a great substitute for caffeine on Friday morning. It arrived with a jolt.

At 8:39 a.m, Tina Green, a Connecticut Audubon member who lives in Westport, posted to the Connecticut Ornithological Association’s listserv: “Paul Desjardins just called to say he found a Townsend’s Warbler at Cedar Hill Cemetery in Hartford.”

Look at a map of Townsend’s Warbler’s range and you see nothing east of the Rocky Mountains. It’s blank, and Connecticut is blanker than blank. Townsend’s Warbler is a western bird that found itself in a cemetery in Hartford. It didn’t know nor did it care that it was the first of its species to be seen here.

Gilles Carter, a member of Connecticut Audubon’s Board of Directors who lives in New Haven, emailed us: “When my text-messaging alert went off this morning on my cell phone, it was early enough there could only be a couple of ‘sender’ possibilities. I guessed right; it was CT Audubon’s Rare Bird Alert. 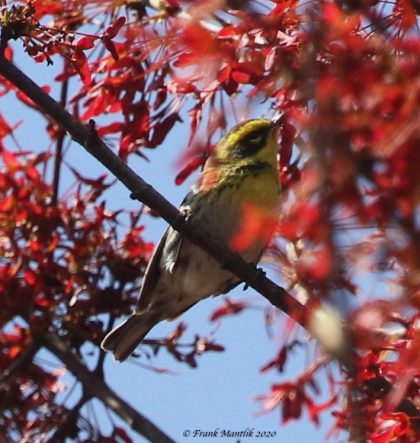 “I thought seriously about hopping in the car and driving up to Cedar Hill in Hartford where it had been found. Alas I was too busy. But the system worked perfectly for those with the time.”

For many it did. About 10 minutes after Tina Green’s first post, another commenter remarked, “That might draw a crowd!”

Among the crowd was Russ Smiley, a Connecticut Audubon member who lives in Marlborough: “I arrived at about 9:30, shortly after a few others arrived in response to Tina’s posting about Paul’s discovery. After 45 minutes of looking, I first re-found the Townsend’s warbler darting around high in deciduous trees.

“Adrenalin pumping, I yelled “Got it!” to bring others to the location, and desperately tried to get photos of the darting bird through the maze of tree branches.

“Some people thought they saw it, but most did not, and it was quite frustrating when it could no longer be seen. Without a clear photo, and none taken by others, I began to doubt my own sighting. Certainly Paul was disappointed that no one had gotten confirming photos.”

I wanted to write something quick for The Daily Bird, so I texted Matt Bell. The enthusiasm that had filled him as he left his house was drained by late morning: “No photos. Bird is an absolute pain.”

Frank Mantlik, a member of the regional board of the Milford Point Coastal Center, was there by mid-morning, prepared to spend the day looking for it, if that’s what it took. The crowd grew to about 30, many wearing masks, everybody keeping their distance. Russ Smiley said, “I decided I had to find it again.”

Frank Mantlik described the scene: “Russ yells out and everybody starts chasing everybody else thinking somebody must have it. It was moving around in the tree tops with other warblers and kinglets. I found it in a red maple and screamed. There were maybe 30 cars along the road but people were scattered all over, searching. so when somebody yells ‘I got it!’, everybody runs.” 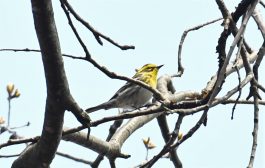 Just because the northeast is beyond the regular range of the Townsend’s Warbler doesn’t mean it hasn’t been in the region before. Frank said that all of the states surrounding Connecticut have had multiple sightings of birds blown off course by the weather; Newfoundland had about 10 last year. Those almost always occur in the fall.

“All the active birders, they’ve put Townsend’s Warbler number 1 on their list for the next bird that will be found in Connecticut. I mean, this has been going on for years,” Frank said. “Those birds in Newfoundland now have to go south. You figure one of those birds is going to have to go through Connecticut one of these years.”

For Frank, it was a special bird: it was the 400th species he’s seen in Connecticut. Only 446 have ever been recorded here, according to the Connecticut Ornithological Association. As far as is known, only one person — the late Noble Proctor, who saw 404 species — has ever recorded more than Frank. — by Tom Andersen, Communications Director