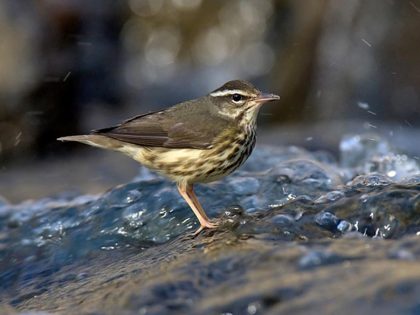 Edited from a version originally published May 1, 2018. Louisiana Waterthrush video by Gilles Carter

by Greg Hanisek, editor, The Connecticut Warbler
These warblers are active, vociferous birds, habitual tail-waggers easily told from our array of other warbler species. Telling them apart is another matter.

Where To Find Them: This is a key to sorting out the waterthrushes, because their habitat preferences are quite different.

In Connecticut, Louisiana Waterthrushes breed almost exclusively along fast-moving streams. They inhabit some of our most picturesque locales, such as clear, cool brooks tumbling through hemlock glens. Since the bulk of their range stretches to our south, we don’t see a lot of them on migration, a time when birds sometimes stray from favored habitats. As a result almost all observations are of birds in breeding spots.

Northern Waterthrushes prefer still water locations such as swamps and bogs. They migrate through Connecticut in good numbers to breeding grounds to the north, so they’re more inclined to show up out of habitat. 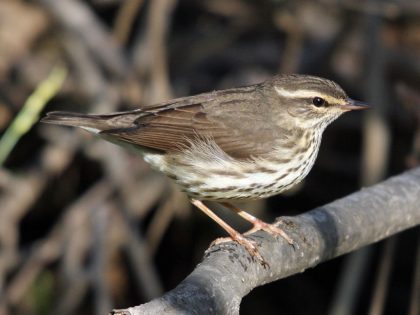 What they Sound Like: This is the best way to identify waterthrushes. They both have similar loud chip notes, but their songs are distinctive. Words can’t do them justice, so it’s best to listen to them.

Here’s the song of the Louisiana Waterthrush.

Here’s the song of the Northern Waterthrush.

When To Find Them: This also provides clues to identity, at least at some times of year.

Louisiana Waterhrushes are early arrivals. Historically they’ve returned to Connecticut breeding areas a week or so into April, although in recent years first arrivals have been noted around April 1 or the last day or two of March.

Northern Waterthrushes are also early arrivals compared to many warblers, but they show up around or after mid-April.

What They Look Like: Waterthrushes are very similar. That’s why their songs are so important. A lot of the visual differences are relative, but here’s a rundown of things to look for (preferably in combination) to ID a silent bird:

Throat: Mostly clear on Louisiana; with fine streaking on Northern.

Supercillium (eyebrow): On Louisiana, buff in front of eye, white and widening behind eye; on Northern more even color and width.

Flanks: On Louisiana, salmon-buff; on Northern, little or no contrast with rest of underparts.

Conservation Status: Neither species is considered at high risk, but both are subject to all the concerns about habitat loss and degradation associated with neotropical migrants.