Beach-nesting birds are hatching. Thank you for doing your part to protect them 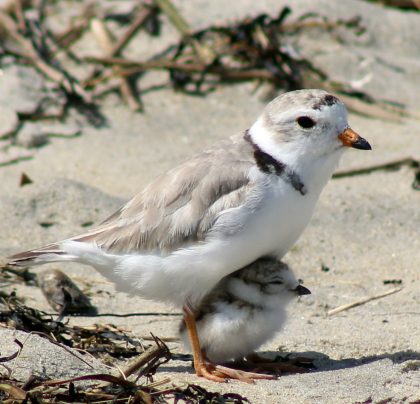 May 26, 2020 — Piping Plover eggs are starting to hatch on Connecticut’s beaches — there are already three hatchlings from the 10 nests at the Milford Point Coastal Center, for example. And the two American Oystercatcher nests there already have one chick each.

It’s impossible to say whether this year will be as successful as the last several. As you’ll see below, there are reasons for concern. But the field crew that your donations support through Connecticut Audubon’s involvement in the Audubon Alliance for Coastal Waterbirds is generally optimistic. The Audubon Alliance’s shorebird protection work is also partially funded by a Long Island Sound Futures Fund grant.

The members of the Audubon Alliance collaborated last week on a press release to ask people to be careful when they’re visiting Connecticut’s beaches. The Connecticut Post/Hearst chain picked it up and turned it into a good story by Tara O’Neill, with photos by Brian Pounds. Read the story here.

Social Distancing More Important Than Ever for Beach-Nesting Birds

Increased foot traffic, off-leash pets, impromptu hair salons have so far made 2020 a problematic year for birds like the state- and federally-threatened Piping Plover.

5/20/20 – Connecticut’s most vulnerable shorebirds have the odds stacked against them. With much of the natural shoreline lost to development, they must successfully raise chicks on beaches and islands with high foot-traffic just to sustain—versus increase—their impossibly small populations. This year, they face a strange new challenge, as do the organizations and volunteers working to ensure their survival: quarantine fallout.

“Piping Plovers, American Oystercatchers, and other vulnerable shorebirds have always practiced social distancing – from people and pets, that is,” said Ana Paula Tavares, executive director of Audubon Connecticut. “But beachgoers may not realize that by getting too close to these birds and scaring them off their nests, they put chicks’ lives at risk. We want everyone to know that due to restrictions, our efforts to protect and monitor important nesting sites have been limited this year. We need everyone’s help to share in the love and joy of birds by giving them space to nest and rest.” 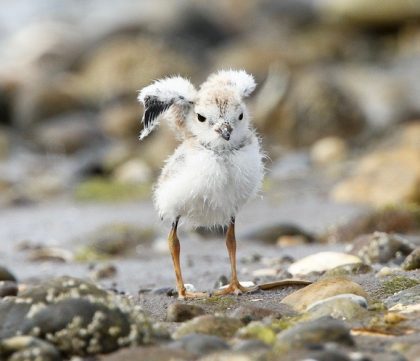 Piping Plovers numbers have risen but the species is still highly vulnerable in Connecticut. Photo by Bob MacDonnell.

2020 has so far produced a rocky start to the nesting season, with locals and out-of-state visitors seeking solace in the outdoors during quarantine. Beyond an increase in foot traffic, the Audubon Alliance for Coastal Waterbirds—the coalition working to protect Piping Plovers, American Oystercatchers, and Least and Common Terns—has observed more off-leash pets than usual, horses, ATVs, and in one case, an impromptu boardwalk hair salon. This comes at a typically quiet time of year for birds, who are often already fledgling chicks by the time crowds arrive post-Memorial Day weekend.

In 2019, the Audubon Alliance for Coastal Waterbirds announced that the 57 pairs of Piping Plovers that nested in the state fledged 1.72 chicks per pair, higher than the regional goal of 1.5 fledglings per nest along the Atlantic Flyway.

“If we continue to meet that goal, the Piping Plover population will eventually start to increase, which would be a tremendous outcome,” said Patrick Comins, executive director of the Connecticut Audubon Society, a member of the Audubon Alliance. 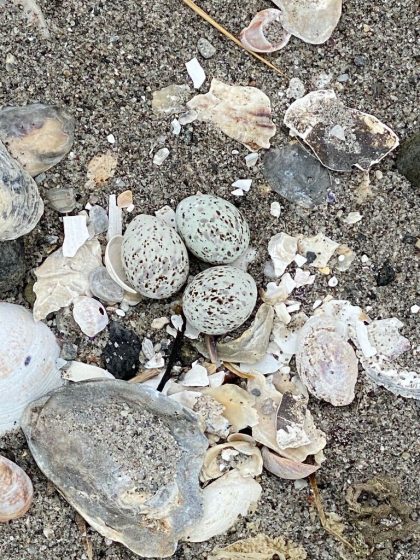 “We are seeing a tremendous increase in the number of people visiting natural areas during this period of social isolation and interest in bird watching is soaring,” said Twan Leenders, senior director of science and conservation at the Roger Tory Peterson Institute of Natural History. “As people are enjoying the benefits and beauty of nature, we encourage everyone to do so responsibly by maintaining a safe distance from wildlife, including our at-risk shorebirds. That is the only way we can together ensure that their numbers continue to increase.”

The nesting success of plovers and oystercatchers in 2019 was a direct result of the time and effort put in by the volunteers and staff of the Audubon Alliance. Ninety-three volunteers and 21 staff patrolled Connecticut’s beaches and monitored nests, the most in the nine years of the program. This year, the total number of active monitors and stewards is nine.

“In the absence of our normal volunteer efforts, we need everyone enjoying the shore to be shorebird monitors and to take care of the shorebirds,” said Sophie Duncan of The Nature Conservancy in Connecticut. “Small steps like keeping dogs on leashes around these birds and avoiding nesting sites can make a big difference.”