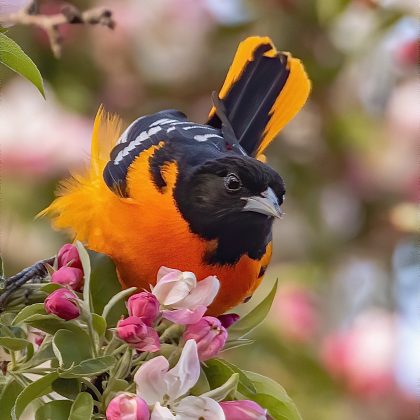 by Tomas Koeck and Tom Andersen
With its orange-flame plumage and loud, operatic song, the Baltimore Oriole attracts attention like almost no other songbird in Connecticut, more so this year it seems — perhaps from baseball fans who miss seeing them at Yankee Stadium and Fenway Park?

It is often a trophy-bird at backyard bird feeders. Judging from the number of Baltimore Oriole photographs sent to us and the reaction to them on our website and social media, only Scarlet Tanagers and Rose-breasted Grosbeaks cause as much excitement among casual observers.

Baltimore Orioles are of the Icteridae family — blackbirds — which also includes Bobolinks, meadowlarks, Red-winged Blackbirds, and grackles. The male and female Baltimore Orioles have different plumages, both beautiful — “the female equally with the male I sing,” as Walt Whitman put it in another context — although it’s the male that tends to catch the eye.

The slightly smaller female is not quite as brightly-colored nor as consistently black as the male.

Another reason the Baltimore Oriole attracts attention is that it nests in places where the birds are easy to see: in parks, at the edge of woodland openings, in orchards. The nest itself, not quite so easy to find as the birds, is a sack-shaped pendant suspended from a high branch.

If you’ve seen Baltimore Orioles in Connecticut, you’ve probably also heard them. The males and the females both sing, and they make a rather raucous chattering sound during breeding season as well. It’s worth listening to them, here. 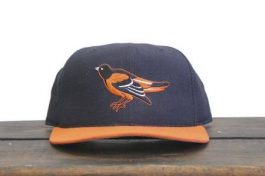 Baltimore Orioles eat insects of all sorts, including caterpillars. At feeders, they are attracted to ripe fruit; birders will often set out cut oranges to attract orioles. They feed on fruit through “gaping” — cutting into the surface in order to suck out the sweet juices. They also feast on dark colored fruits such as cherries and mulberries.