by Milan Bull, Senior Director of Science and Conservation
One of our most threatened species, the Eastern Meadowlark has slowly disappeared in Connecticut along with the large and rambling agricultural meadows that once dominated our landscape.

To many an old farmer, the sweet and clear Tee-you, Tee-yair! sounded like “Spring is here!” Careful observers can still see and hear this bright relative of our blackbirds in open, grassy habitats, sometimes perched on fences and bushes in a few Connecticut locations, especially where hay is harvested later in the season, giving the birds ample time to nest in the grasses. It is a birder’s treasure wherever it is found.

Where to find it: The most reliable meadowlark locations during the nesting season are large grassy meadows usually larger than 20 acres in size. Here are two reliable locations: Connecticut Audubon Society’s Bafflin Sanctuary in Pomfret (ask Land Manager Andy Rzneznikiewicz for exact locations) or Rentschler Field in East Hartford (sometimes visible from Cabela’s parking area). The big meadows of the Thompson Dam in Thompson is another reliable location.

So far in May 2020, they’ve been seen and heard near Litchfield, Southbury, Tolland, Pomfret, and on Horsebarn Hill at UConn in Storrs.

How to find it: The clear, distinctive whistled notes of the Meadowlark are really the best clue to its proximity. Scan the meadow for possible perches, such as shrubs or posts that the bird is likely singing from. It is a hard bird to miss if you are in the right location and within hearing range in the springtime. 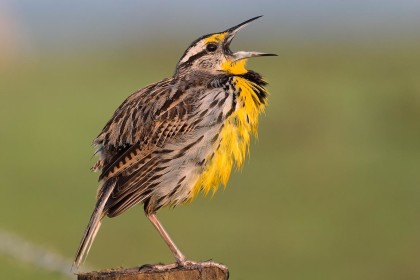 What it looks like: Meadowlarks are about the size of a Robin with an unmistakable bright yellow breast and a dark chevron on its chest. Its back is cleverly mottled with tan and brown stripes, blending in with the grasses and effectively hiding the bird from avian predators.

Also distinctive is the flight pattern of the Meadowlark — a series of stiff wing beats followed by a glide. In flight, Meadowlarks display conspicuous white outer tail feathers.

If you’re looking in a likely location but don’t see it, despair not! These large grasslands are home to many unique and fascinating species. Don’t overlook such surprises as Bobolinks, American Kestrels, Savannah Sparrows, Eastern Bluebirds, even the rare Grasshopper Sparrow. A trip to the grasslands in the spring is always a great adventure.