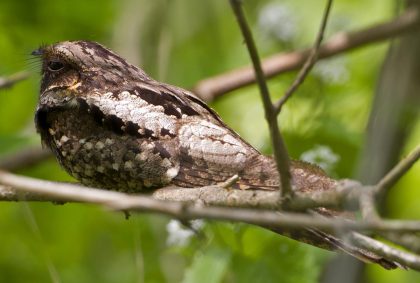 Edited from a version published in May 2018

by Helena Ives
When I was growing up, my dad always defined the beginning of spring by the arrival of the song of Eastern Whip-poor-wills filling the woods of our family home in Maine. Eastern Whip-poor-wills typically arrive in their breeding grounds in late April-early May, timed with the appearance of the insects that make up their diet.

In Connecticut, and most of New England, Eastern Whip-poor-wills have become much more scarce than earlier accounts indicate. This eBird map shows the locations of observations from a year ago and this year.

Where to find them: In their breeding and winter habitats, Eastern Whip-poor-wills spend most of their time in forested areas.

They roost on tree limbs during the day and create nests in leaf litter on the forest floor, but tend to remain in a relatively small area for most of their time in their territory.

The forests they prefer have little to no understory, likely because it provides the leaf litter they prefer to nest in and helps them to remain unseen in their habitat. Researchers have also found that populations of Eastern Whip-poor-wills perhaps base their habitat decisions on the species of tree within a certain forested area, favoring high densities of white pine, aspen, birch, and oak. 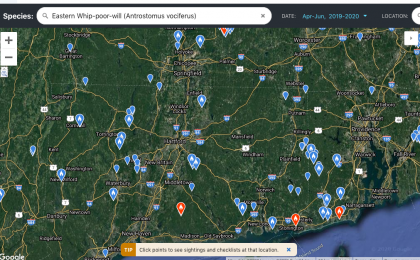 eBird map showing locations of whip-poor-wills in Connecticut in April, May, and June 2019, and this year.

What it looks and sounds like: Because they are elusive to see, Eastern Whip-poor-wills are typically identified by their song. As a “name-sayer,” the vocalization of Eastern Whip-poor-will is distinctive and clearly resembles the name of the species. Note its scientific name, by the way: Antrostomus vociferus.

If you do get a lucky glimpse of one, you’ll notice that it is incredibly effective at remaining unseen in the forested ecosystems it inhabits. Eastern Whip-poor-will’s overall plumage is gray-brown with streaks of black, brown, and tawny. A band of white on the lower portion of the throat, and spots and speckles of buff and tawny throughout the wing feathers, aid in the resemblance to leaf litter and tree bark.

Their body form is also distinctive of the nighthawk family they are a member of. Their large head is flattened on both sides, while their body is longer horizontally than it is vertically. If you ever get a close up look at their heads, you’ll notice feathers that look very similar to whiskers around their bill; these are called bristles and are believed to aid in the capture of insects during flight.

Behavior: Eastern Whip-poor-wills are known to be crepuscular – that is, being most active at dusk and dawn, with the exceptions of being fully nocturnal on nights with bright moonlight.

During the spring, males will begin vocalizing shortly after sunset within their territories, which is a part of their courtship displays. Although hard to document due to low lighting, researchers have found courtship displays to be quite elaborate and Eastern Whip-poor-wills are believed to be monogamous. Eastern Whip-poor-wills define and regulate their breeding territories and communicate among themselves in low, fluttering and clucking calls that are sometimes referred to as “growls” and “hisses.”

Conservation status: Because Eastern Eastern Whip-poor-will prefers densely forested areas, recent population declines could be attributed to declines in forest acreage due to human development. Their preference for little to no understory vegetation could mean that Eastern Whip-poor-wills are dependent on a certain age of forest. Typically, young forests have a higher density of understory because more sunlight gets through under-developed tree canopies. Older forests have much lower percentages of understory vegetation because of dense canopies that let hardly any sunlight through to the forest floor.

Due to widespread agriculture in the mid-nineteenth century, most areas old growth forests in Connecticut were reduced to create more open space. Because of this, much of the forest in Connecticut is currently mid-growth forest, which presents difficulties for species like Eastern whip-poor-will that are considered habitat specialists.