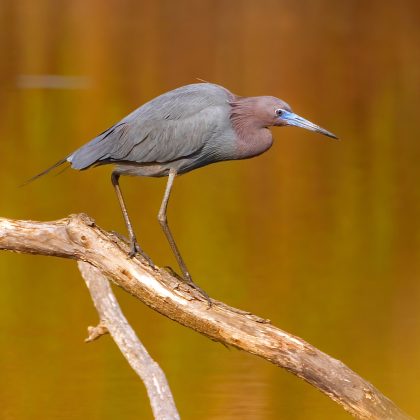 Edited from a version published in June 2016

by Nick Bonomo
The Little Blue Heron is a medium-sized heron that in adult plumage is a uniform blue-gray in color.

Young birds are white and slowly acquire the adult’s dark plumage over the first two years of life, one feather at a time. The transitional young birds can appear pied and patchy, mixing white and dark feathers side-by-side in variable patterns.

The bi-colored bill is a good field mark at all ages: pale blue-gray at its base and black towards the tip. Leg color, always important to note when identifying herons and egrets, is usually a pale, dull green but can become darker in breeding plumage at this time of year.

An all-white immature Little Blue can appear quite similar to a Snowy Egret of any age. About the same size, the Snowy Egret will show black legs with yellow feet and a black bill that is sometimes gray at the base. Great Egret, a much larger species, can be easily distinguished by its bright orange-yellow bill and black legs and feet.

Where to find it: The first Little Blues arrive in April and stay into October, sometimes later. It is strictly an inhabitant of coastal salt marshes. It nests on Duck Island in Westbrook and Charles Island in Milford. 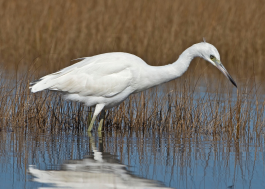 Places to search include the Norwalk-Westport area; Shell Beach in Guilford; Hammonasset Beach State Park in Madison; Plum Bank Marsh in Old Saybrook; along the lower Connecticut River; and Barn Island, in Stonington. It occasionally appears inland later in summer when the odd young bird is prone to wander.

Conservation status: The IUCN considers Little Blue Heron as a species of “Least Concern,” with a large and stable population. 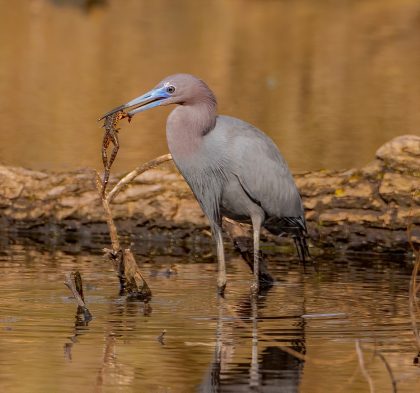