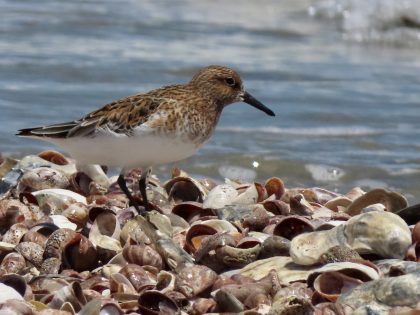 A Sanderling in breding plumage photographed during the recent Migration Madness Birdathon by Patrick Comins.

Edited from a version published in July 2016

by Milan Bull, Senior Director of Science and Conservation. Videos by Gilles Carter.
One of our most ubiquitous shorebirds is the Sanderling. Only the Ruddy Turnstone and the Whimbrel may have a wider distribution.

Nesting in the high arctic, Sanderlings can be found before and after the nesting season on temperate and tropical beaches all around the world. They love hard-packed beaches where they chase the waves back and forth. Look for them at Hammonnasset, Sandy Point, and the Milford Point Coastal Center, among many other possibilities.

In North America, some Sanderlings may winter along the New England coast, including Connecticut, while others will fly more than 6,000 miles to South American temperate beaches. Some will linger here into June, fly to the Arctic to breed, and return in late July.

Beaches are the Sanderlings domain. They characteristically run back and forth following the waves, feeding on small marine invertebrates disturbed by the wave action. 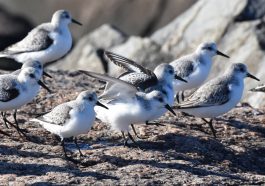 A grain of Sanderlings in winter plumage, photographed by Gilles Carter.

What it looks like: Sanderlings are an easy identification mark. They are very pale, somewhat plump, medium-sized sandpipers with short, black, stout bills and black legs. In breeding plumage, they are rufous on the head, neck and back. Early fall migrants often show some of this left-over rufous plumage. Winter-plumaged birds display a very pale head and whitish cheeks, much different from any other shorebird on the beach.
How to find it: Look for any shorebirds running back and forth following the waves and you will likely be looking at Sanderlings. Although Semi-palmated Sandpipers and other shorebirds will sometimes chase waves, none do so quite as obsessively as the Sanderling. A group of Sanderlings is called a “grain.” Sanderlings often roost together in large, compact flocks on the beach.

Connecticut’s beaches provide Sanderlings, Least Sandpipers, plovers, and many other shorebirds a place to rest and refuel, and are globally-important stopovers for Semipalmated Sandpipers. If they can’t rest here and eat enough to fuel themselves for migration, they might not survive. If you walk too close, they’ll scatter and they won’t get enough rest or food.

Thanks to a Long Island Sound Futures Fund grant, Connecticut Audubon is working through the Audubon Alliance for Coastal Waterbirds to let beach-goers know to give shorebirds plenty of room on the beach.