Edited from a version published July 2014


by Milan Bull, Senior Director of Science and Conservation. Video by Gilles Carter.
Yellow-crowned Night Herons are birds of marshes and wet meadows but are not widely distributed across the state. These waders live in or near our coastal wetlands and forage in tidal marshes, tide pools and along the shore of Long Island Sound where they feed on crustaceans, largely fiddler crabs.

Our Milford Point Coastal Center is by far the most reliable location to see them in the state. Hammonasset Beach State Park in Madison is a likely spot as well. 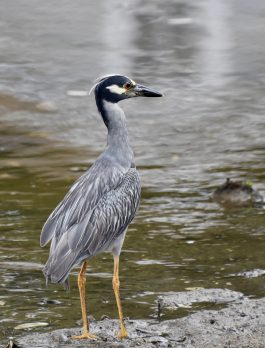 What it looks like: Similar to the Black-crowned Night-Heron in size and shape, Yellow-crowneds are medium-sized, rather stocky herons with a distinct yellowish crown stripe, black face and bill with white cheeks. Their bodies are gray with yellow legs. Juveniles are brown with tiny white spots on the wings and narrow, indistinct streaks on the underparts.

Conservation status: Listed as Least Concern by the IUCN, Yellow-crowned Night-Herons seem to have stable populations in general but are vulnerable to habitat loss and degradation.