Diary of a teenage birder from Connecticut, circa 1910. Part 1 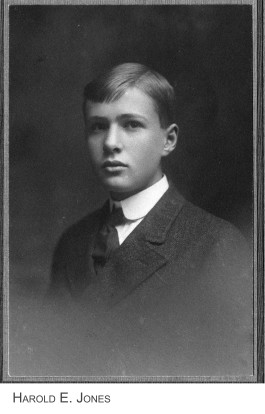 May 6, 2020 — Some time ago we received an email from a woman named Lesley Alexander, with an offer:

“I have some notebooks of bird observations from 1910. Would you be interested in them as a guide to habits today, considering the changes in climate? They were made by my father, now deceased.

“The written observations were in New Canaan, CT in 1909 and 1910. The precise location was Waveny Farm-Estate, now a city park.”

Waveny had been the estate of the Lapham family, founders of Texaco. Some of it was sliced off to make room for the Merritt Parkway, some for New Canaan High School and some for the Waveny Care Center. The rest – 300 acres – became a town park. Lesley Alexander’s grandfather managed the estate, which included a large house, farm and barns, a power plant, and a poultry plant.

A few days after Mrs. Alexander’s email, a package arrived, as promised. It held two diaries and three field notebooks kept by her father, Harold Jones (1894 – 1960) from 1909-1911, when he was a teenager living at Waveny.

We’ve published excerpts before but this is a good time to look back at what birding was like in a far different era. We’ll publish more excerpts as the days go on. The material in italics is exactly as Harold Jones wrote it. 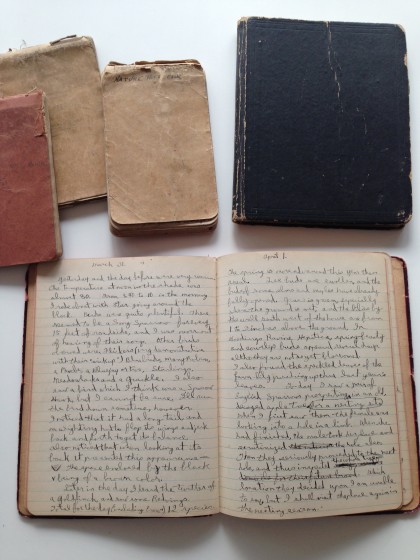 1910
March 31. Yesterday and the day before were very warm. The temperature at noon in the shade was almost 80. From 8.40 to 10 in the morning I rode about with Star going around the block. Birds were quite plentiful. There seemed to be a Song Sparrow for every 15 feet of roadside, and I was never out of hearing of their songs. Other birds I observed were: Flickers (very demonstrative with their ‘wickup’) Bluebirds, many Robins, a Phoebe, a Bluejay or two, Starlings, Meadowlarks and a Grackle. I also saw a bird which I think was a Sparrow Hawk, but I cannot be sure. I’ll run the bird down sometime, however. I noticed that it had a long tail and on alighting had to flap its wings and jerk back and forth to get its balance …

Later in the day I heard the twitter of a Goldfinch and saw some Redwings. Total for the day, (including Crows) 12 species.

April 1. The spring is more advanced this year than usual. Tree buds are swollen, and the buds of some elms and maples have already fully opened. Grass is green, especially where the ground is wet, and the lilies by the wall south west of the house are from 1 to 3 inches above the ground. In Woodings Ravine Hepatica, spring beauty and cowslip buds appeared several days, altho they are not as yet blossomed. I also found the speckled leaves of the fawn-lily pushing up thru last year’s leaves. To-day I saw a pair of English Sparrows prospecting for a nesting site in an old, decayed apple tree. …