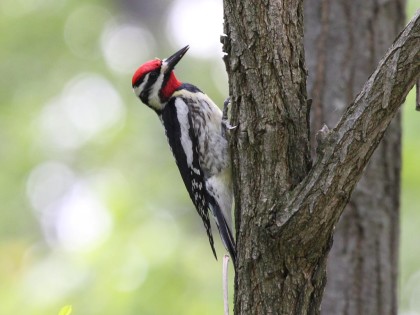 May 17, 2020 — Reading the bird diaries of 15-year-old Harold Jones, his discoveries seem so modest. Cowbirds, flickers, bluebirds, meadowlarks. It’s worth remembering that a teenager learning about birds in 1910 New Canaan was limited in several ways.

He had no car, for example, and could go birding only as far as his feet or his horse could take him.

He had no high quality optics, which didn’t exist then. He refers often to using his “glass” to identify a bird – for example in the entry below, where he writes that he “casually raised my glass,” which seems to refer to the kind of simple scope you think of an old-sea captain using. Once or twice he refers to his “opera glasses.” In short, he would have had a hard time, by today’s standards, getting a good look at the bird.

And he had no field guide, which really wasn’t invented until Roger Tory Peterson published his first Guide to the Birds in 1934. Young Harold made field notes and then used reference books to make his identifications.

In these entries, he notes a number of first-of-the-year migrants. Scroll through Natural Selections for parts 1, 2 and 3.

This is another red letter day. While rambling through the Lapham Woods this morning I heard a woodpecker tapping, in a tree high above me. Thinking it to be a downy, I casually raised my glass, and was greatly surprised to see a Yellow-bellied Sapsucker. As not only the crown but also the throat were a brilliant crimson, I knew the bird to be a male. When I first saw him he was in a hickory tree some 30 feet from the ground, and he stayed in almost the same place for five or ten minutes. Then he flew away to another tree, but shortly returned to the identical spot he had left. He pecked and tapped at the bark quite vigorously, but what in time he was up to I could not discover. The sapsucker has been looked upon with suspicion, and I will watch with interest to see whether he inflicted any damage upon the tree. This was my first sapsucker of the season. Another new bird I observed was a Kingfisher at the Mill Pond. 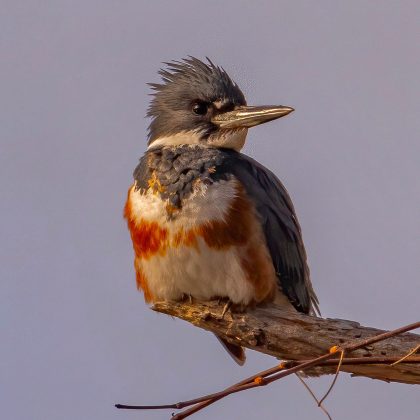 April 15 [Friday] Yesterday I made a mental resolve to track down a Hermit and a White-throat within 48 hours. True to my word, or rather, thought, I have found both of these within the appointed time. Yesterday afternoon while walking through the Camp Woods I chanced upon my first Hermit of the season. I identified him without any trouble, from his rufous tail and the habit of raising said appendage. I remember that last autumn it took me a deathly time getting acquainted with this species …. Today I was wandering around near the garden when I heard a faint “screeping” noise, a vague, uncertain sound, coming from nowhere in particular, and resembling somewhat a grasshopper’s note. Seating myself on a pile of beanpoles I waited for the author of the note to appear. Soon who should pop up but a newly arrived White-throat, as handsome and jaunty as ever. He was silent, save for the note which had attracted me, but I trust to hear his merry whistling before many days.

However, the White-throat was not my greatest discovery today. In the Camp Woods this morning I saw a new Warbler, the first of the Mniotiltidae this season, and moreover a brand new species to me. It was yellowish underneath with reddish streaks upon its breast. At first I thought it to be a Yellow Warbler, but later decided upon the Palm Warbler as the correct identification. Yellow Warblers do not come until May, while Palm Warblers are usually the earliest of their family (Blanchan).

Bluebirds have taken the lead in the nest building business. A pair have nested in the decayed heart of an apple tree, near Rannikie’s. Their [sic] are five bluish eggs in it.