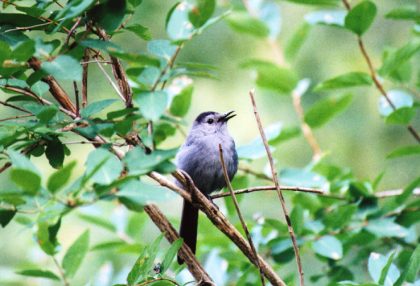 This handsome gray bird can be distinguished by its bold personality and characteristic call, reminiscent of a cat’s meow. They are more often heard than seen, spending much of the day hidden away in thick shrubs and trees. Although they tend to be secretive, they are very energetic and boisterous birds.

What it looks like: The gray catbird wears a uniform gray plumage with a black crown. It is medium-sized and slender, sporting a long, thin black bill. This bird often cocks its long, black tail, exposing its chestnut-colored patch underneath.

Where and how to find it: The gray catbird typically resides in dense tangles of shrubs, small trees, and vines in woodlands and residential areas. Throughout all seasons, it favors dense low growth and vegetative substrate, especially if thorny vegetation is present. This bird usually avoids unbroken forest and coniferous woodlands. Additionally, the gray catbird is hesitant to fly across open areas and usually prefers hurried, low darts over vegetation.

Other Interesting facts: The gray catbird is a member of the Mimid family, meaning it has a remarkable ability to mimic a wide array of birds and other sounds. It is a relative of mockingbirds and thrashers and shares their impressive vocal and musical abilities. The gray catbird’s distinctive song comprises an assortment of melodious, raspy, and harsh notes, intermixed with catlike mew notes.

The gray catbird eats insects and berries and is a nocturnal migrant. It spends its winters mainly throughout southeastern United States, Mexico, northern Central America, and Caribbean Islands.

Courtship usually involves a male chasing a female, raising his head up or down while bowing and fluffing out his feathers. Early in the breeding season, the male sings constantly throughout the morning and evening.
The nests, which are mostly built by the females, are large bulky open cups of twigs, grass, leaves, straws and weeds. The inner lining is finely woven with grass, hair, and rootlets. The nests are usually placed in dense shrubs, thickets, or vines 3-10 feet above the ground. The female lays and incubates two to six light blue eggs. Incubation usually lasts 12 to 14 days, with the young leaving the nest within 10 to 13 days after hatching. If a cowbird introduces an egg into a catbird nest, the gray catbird will swiftly break it and expel it from the nest.

While gray catbirds are often shy, they are not afraid of predators and will aggressively respond to threats by flashing their tails and wings while making their characteristic cat-like sounds.

Conservation Status: Gray catbird populations seem to be holding steady, but declines are being observed in many regions of North America, possibly because of loss of suitable habitat on breeding and wintering grounds.