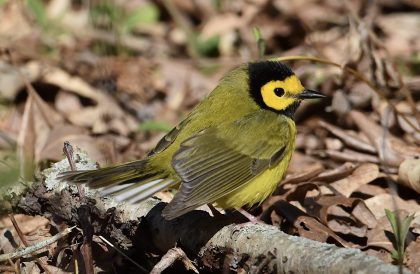 May 12, 2020
Hooded Warbler
Setophaga citrina
Edited from a version published in May 2017.
by Christopher S. Wood. Video and photography by Gilles Carter.
Usually first noticed by a ringing “weeta, weeta, weeteeo” song, a Hooded Warbler sighting highlights almost any bird walk in the Connecticut woods.

Hooded Warblers reach the northern edge of their breeding range here in Connecticut (although there is a breeding population in southern Ontario), generally arriving during the first week of May and setting up housekeeping almost immediately.

What it looks like: Adult male Hooded Warblers are unmistakable, with a bright yellow face surrounded by a black hood and with all-yellow undersides. None of the other yellow-faced, black-throated warblers (such as Black-throated Green) have completely yellow undersides. Fully adult females show at least the outline of the black hood, although first year females are rather non-descript and might be confused with females of several other species. However, their habit of distinctively flashing large white spots on the tail confirms the identification.

The Migration Madness Birdathon is May 22, 23 and 24. Click HERE to learn how to participate.

Where to find Hooded Warblers: The combination of habitat availability and the northern limits of its range focuses Hooded Warbler breeding into an east-west band across the middle of Connecticut. 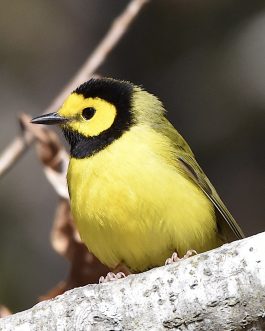 Conservation Status: Hooded Warblers were once common along the coast of Connecticut, according to early accounts, but there are virtually no eBird reports from the coastal area during nesting season over the past 10 years. Clearly this is a result of intensive coastal area development.

Although listed by the IUCN as a species of least concern and with increasing population rangewide, the average number of Hooded Warblers recorded on Breeding Bird Surveys in Connecticut has increased significantly since the 1960s. However the species might become rarer as nesting habitat of mature mixed forest with dense understory and canopy openings is lost. Some targeted habitat management, such as selective logging, may be appropriate and relatively simple.

Interesting Facts: Recent DNA research has resulted in Hooded Warblers, along with 33 other wood warblers, being classified in the single genus Setophaga (“moth eaters”). Hooded Warblers were formerly joined with Wilson’s Warbler and Canada Warbler in the genus Wilsonia; however, based on the DNA research, they may actually be more closely related to the American Redstart.