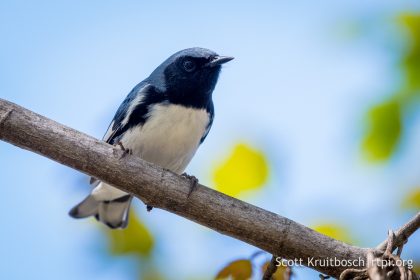 Black-throated Blue Warbler photographer over the weekend at Birdcraft by Scott Kruitbosch.

May 4, 2020 — Ospreys: As of Saturday there were two eggs in the Osprey nest at Milford Point. Watch the Osprey Cam here.

The two photos here, by Scott Kruitbosch, were among them.

Ovenbirds: Speaking of Ovenbirds, we found via Twitter a really interesting recent presentation by a high school student named Allison Mashtay called “Environmental Impact on Ovenbird Songs.” The results themselves are fascinating, but equally compelling was the “story map” she produced — simple, clear, jargon-free beautifully explained. Here’s an excerpt:

How does the environment impact how often ovenbirds sing?

To test this question, we looked at 32 forested areas in Connecticut (the blue spots on the map) We used autonomous recording units (ARUs) to get our ovenbird song data. …

We set them up in the forests and recorded all the sounds in each area. Then, we listened to each recording carefully and marked down every time we heard an ovenbird sing.

Next, we picked the environmental variables that we wanted to look at. We chose the following:

We are going to look at each of these variables individually to see if we can answer our main question. 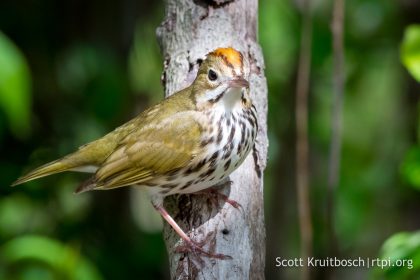 Allison’s mentor is Eliza Grames, a Ph.D. candidate at UConn. Her presentation was part of a webinar by Great Hollow Nature Preserve, in New Fairfield, whose executive director, Chad Seewagen, wrote about his own Ovenbird research in our 2018 Connecticut State of the Birds report.

Great-crested Flycatchers. They are not my household’s favorite bird. They nest near the house and starting calling loudly and harshly when we’re still asleep. On the other hand, you have to admire this: they line their nests with snakeskins, which I had heard about, but what I didn’t know was the reason (it has to do with flying squirrels). Gardener and writer Margaret Roach interviewed a researcher from Arkansas who explained. here.

Hummingbirds: We have 50 first-of-year hummingbird sightings on our map as of 8:30 a.m., with more to come.

On the schedule: The Daily Bird — Yellow-crowned Night Heron, written by Miley Bull, with video by Gilles Carter. Look for it later. Or sign up to get it via text.