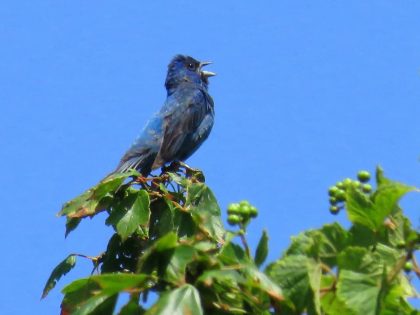 Edited from a version published in 2014.

Is the strikingly-plumaged Indigo Bunting up to the popularity challenge posed by the brilliant orange of the Baltimore Oriole or the brilliance of the Scarlet Tanager, both long-time favorites?

In fall during migration the males molt into the brown color but the oldest males will still retain a few blue feathers. Indigo Buntings are a little over five inches long, or similar in size to a goldfinch.

You can find them throughout the state, along the edges of fields, power line rights-of-way, early successional habitats, and weedy fields. Indigo Buntings will visit bird feeders in May during the spring migration and usually switch over to natural foods by June. Their preferred food is insects and seeds.

Indigo Buntings are possible at any of the Connecticut Audubon Society sanctuaries, or other natural areas, that have brushy meadows and brushy field edges. 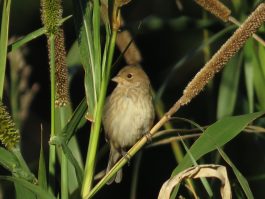 An Indigo Bunting in October. Photo by Stefan Martin.

The Pomfret sanctuary has many nesting pairs around the edges of our fields. The males call from the tops of the tallest tree or bush along the hedgerows and fields. The hedgerow at the parking lot and the trail behind the nature center always have at least one singing male.

At the Trail Wood sanctuary check the scattered trees in the Starfield meadow. In September and October the Sunflower field at the Pomfret sanctuary usually has a couple dozen Indigo Buntings feeding in it. Remember they are mostly brown by then.

You can also look for Indigo Buntings at our Pratt Sanctuary in New Milford, H. Smith Richardson Sanctuary in Westport, and Banks South Farm Sanctuary in Fairfield.

Many early successional bird species, including Common Yellowthroats, Blue-winged Warblers, and Eastern Towhees, are found in the same habitat. Connecticut Audubon is creating and managing the early successional habitat that these birds need in Pomfret, and at the Chaney Preserve in Montville, the Smith Richardson Preserve in Westport, the Croft Preserve in Goshen, and elsewhere. 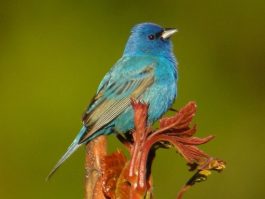 Conservation status: The IUCN lists Indigo Bunting as being of least concern but Indigo Bunting numbers in Connecticut are down because of the loss of early-successional, scrub-shrub habitat the bird requires.