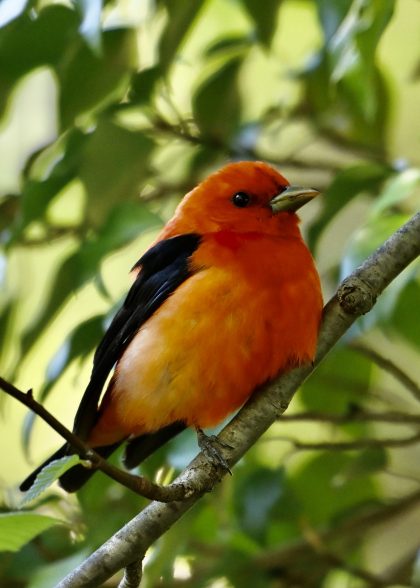 Edited from a version published in July 2016


A competitor of Baltimore Orioles for the title of most noticeable songbird in Connecticut, Scarlet Tanagers are a fairly common forest nesting bird in Connecticut. Most of the larger and many of the smaller forested areas of the state will have nesting pairs. They are mainly associated with oak forests but also look for them found in other deciduous as well as mixed conifer forests.

About the size of a catbird or cardinal, the male Scarlet Tanagers are a brilliant, almost neon red color with black wings. On occasion some males are orange instead of red; they are referred to as the Orange Variant Scarlet Tanager (one has nested in the past at the Bafflin preserve in Pomfret).

From mid to late August through the winter, the males lose their scarlet feathers and molt into a greenish yellow color. The females are yellowish with brownish wings.

At this time of year they can be found by listening for their song call. Roger Tory Peterson described it as “suggesting a robin with a sore throat.” The “chik-burr” call note is also distinctive. They respond to “pishing” and seem to be curious about the sound. This will help you spot the bird in the dense forest canopy.

If you know of a mulberry tree, sit by it and watch all the activity as birds feed on the berries; Scarlet Tanagers are frequent visitors to those trees.

In fall, tanagers join mixed flocks and can be found in shrubland habitat feeding in various berry bushes.

Tanagers are so common that from May through August it is pretty hard to not find one in Connecticut. But if you have an unlucky day, you’ll still be able to find Yellow-throated and Red-eyed Vireos, Blue-gray Gnatcatchers, various woodpeckers, Veerys, and Wood Thrushes, to name a few birds found in similar habitats as Scarlet Tanagers.
Conservation status: They considered of least concern, fortunately. The two main threats they face are forest fragmentation due to development, and Brown-headed Cowbirds. Apparently their nests are frequently parasitized by cowbirds, and the Scarlet Tanager parents can’t tell the difference between their eggs and cowbird eggs.
Contact Us
Privacy Policy       Financial Information       Photo Credits       Donate Your Car