Thursday’s check of the 71 gourds found chicks in 37 of them — 144 baby birds in all. Seven eggs remain unhatched.

In his report to the two-dozen people who have sponsored gourds this year, Frank Mantlik wrote: “It is perhaps unlikely that any additional eggs will hatch, due to being unviable, but who knows? 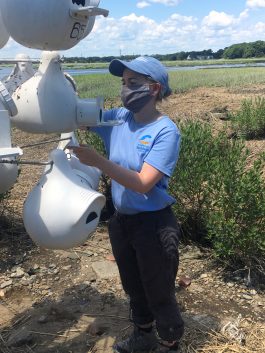 Frank Mantlik snapped this shot of Katerina Gillis checking one of the gourds.

“It should be stated that is is sometimes difficult to accurately count all the chicks, as they invariably huddle together on the green leaves lining the nest cup.”

The Purple Martin team on Thursday consisted of Lori Romick, who like Frank is a member of the Coastal Center regional board; and Stefan Martin and Katerina Gillis of the Connecticut Audubon staff.

Until several years ago Purple Martins were listed as threatened in the state. But the success of colonies like those at the Coastal Center (along with the discovery of new colonies) resulted in a change in that official status, to “special concern” — an indication that they’re doing better.

We’ve hooked up a camera to gourd number 38, to live stream the nest. You can also watch this clip of the hatchlings.

Names
The #BirdNamesforBirds movement has two goals: the immediate goal is to persuade the American Ornithological Society to change the name of McCown’s Longspur. The longer-term goal is to change all bird names so they represent characteristics of birds rather than honor people from the past.

The organizers petitioned the AOS, which responded positively to the McCown’s request: “In June 2020, using the new guidelines as a frame of reference, the NACC [the AOS committee that oversees names] began drafting a new proposal to change the English name of McCown’s Longspur (Rhynchophanes mccownii), a bird named for a U.S. Army Captain and amateur ornithologist who later became an officer in the Confederate States Army. The decision to write this new proposal was motivated by a change in social perception on racial issues, particularly in recent weeks.”