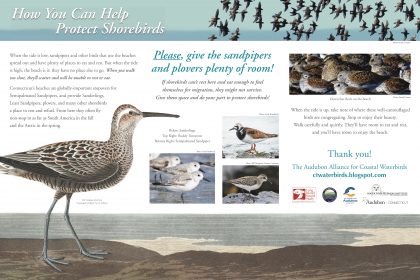 July 20, 2020 — Shorebirds have started their migration from the far north. Thousands are on Connecticut’s beaches now and thousands more will be here soon to feed and rest.

A great place to watch is the Milford Point Coastal Center, where the numbers can be spectacular.

Just as the Piping Plovers and American Oystercatchers that nest on Milford Point’s beach and sandbars need space to hatch their eggs and raise their young, the migrating shorebirds need space to rest and eat.

Connecticut Audubon worked with the Audubon Alliance for Coastal Waterbirds on a new sign, underwritten by the Long Island Sound Futures sign and soon to go up. It asks people to give the sandpipers and plovers plenty of room. It’s especially important at high tide when the beach and sandbars are at their narrowest. Here’s what it says:

When the tide is low, sandpipers and other birds that use the beaches spread out and have plenty of places to eat and rest.

But when the tide is high, the beach is it: they have no place else to go.

Connecticut’s beaches are globally-important stopovers for Semipalmated Sandpipers, and provide Sanderlings, Least Sandpipers, plovers, and many other shorebirds a place to rest and refuel. From here they often fly non-stop to as far as South America in the fall and the Arctic in the spring.

If they can’t rest here and eat enough to fuel themselves for migration, they might not survive.

If you walk too close, they’ll scatter and they won’t get enough rest or food.

So please, give the sandpipers and plovers plenty of room. 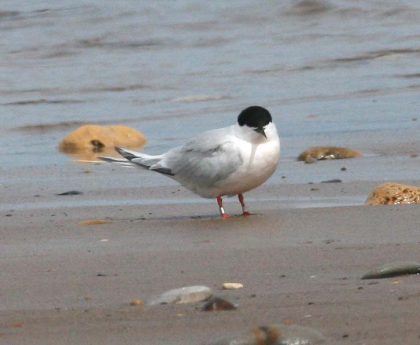 Roseate Terns
When you’re birding at Milford Point, or anywhere on the shore of Long Island Sound, be alert for federally-endangered Roseate Terns, especially those with bands on their legs.

Biologists who work at the tern colonies on Falkners Island, in Guilford, and Great Gull Island, off the tip of Orient Point, Long Island, regularly afix leg bands to terns there. The bands contain three characters that are legible through scopes and binoculars, saying where and when the terns were banded.

Researchers on Cape Cod suspect that there are many Roseate Terns that don’t return to Great Gull and Falkners as two- or three-olds. They’re hoping to gather information to help confirm or refute the theory.

So if you see a tern with a leg band and can read the three-character code, make a note and report it at www.reportband.gov.

And let the Audubon Alliance for Coastal Waterbirds know too: ctwaterbirds@gmail.com. Thanks!