Return of the Daily Bird: Ovenbird 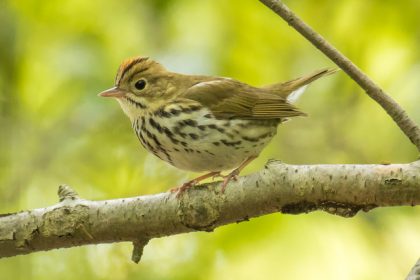 July 22, 2020 — The Daily Bird is back after a month — with one big difference: we’ll continue to call it the Daily Bird, but the amount of material we have dictates that it will be more like the “two- or three-time-a-week Bird.”

Nevertheless, it will feature the same great authors and the same great photographers, artists, and videographers. We hope you enjoy it. And remember, you can get it via text by signing up here.

Edited from a version published in July 2019.

by Chris Wood
Walking along my regular birding/hiking route at Whittemore Sanctuary in Woodbury in late spring, two ubiquitous birds demand my attention: Red-eyed Vireo and Ovenbird. Red-eyed Vireos may be the most common woodland songbird in the Northeast, but looking over my eBird data for Whittemore (a 680 acre mixed forest preserve) over the last two years, Ovenbirds lead there by about 2:1.

Ovenbirds breed from South Carolina through New England and eastern Canada all the way to northern British Columbia in northwest Canada. They are known to be sensitive to forest fragmentation and most kinds of forest disturbance, such as timbering, and they tend to require large forest blocks for breeding habitat.

While forest fragmentation remains a significant concern here in Connecticut, recent population trends for this bird, based on Breeding Bird Surveys throughout its range, appear to show stable or even increasing numbers. This may be a reflection of reforestation trends as well as land conservation efforts. (Plug: another reason to support Connecticut Audubon and similar organizations.) 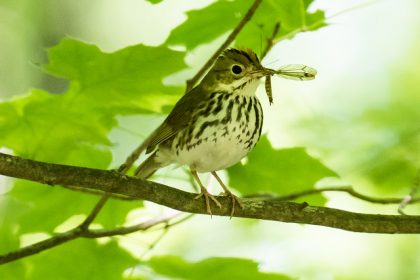 The results of the current Connecticut Bird Atlas project compared to data such as that from the 1982-1986 Breeding Bird Atlas project and recent summer bird counts will provide better insight into the status of this forest dweller in our State.

Finding Tips: They are hard to miss. “TEAcher, TEAcher, TEAcher” rings out through the woods, almost to the point of distraction, especially when combined with chipmunks, toads and tree frogs, and the aforementioned vireos.

Ovenbirds are first on the taxonomic list of warblers in North America, meaning they are presumed to have arisen early in the evolution of warblers. They are certainly warbler-esque in appearance and habits, although they also display some convergent evolutionary characteristics with woodland thrushes, notably appearance and feeding strategies.

Olive-backed with dark streaks and spots on the breast, Ovenbirds resemble a combination of Veery and Wood Thrush, although their orange cap gives them away if their singing has not already.

Ovenbirds may be found in almost any large, unfragmented (50+ acres) deciduous/mixed woodlot in Connecticut, including State forests and protected open spaces like Connecticut Audubon’s Deer Pond Farm in Sherman. May and early June are best for finding these birds, as they are actively singing and foraging. If you notice one in early June, stop and watch for a while – you may see them feeding fledglings.

Habits: Also like thrushes, Ovenbirds glean invertebrate prey and occasionally seeds from the forest floor leaf litter, where they make their nests. The Dutch oven shape of their nests give this species its common name and while their nests are notoriously difficult to locate on purpose, I stumbled over one once, flushing the brooding adult. I felt guilty but took a quick photo in case I never see another in the wild.

Stopping to watch these pretty little warblers go about their serious business of nesting and raising young is inspiring. They are so earnest and committed, yet somehow seem to be enjoying themselves. 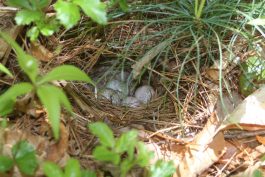 Conservation: The Birds of the World Online account for Ovenbird summarizes their population status: “By avoiding fragmented habitat with higher risks of nest predation and brood parasitism, Ovenbird populations may be successful. The future success of Ovenbirds appears to depend on the continued existence of large areas of core habitat, especially the Ozarks, Appalachia, Pennsylvania, New England, northern Wisconsin, and Quebec and Ontario.”

So if you hear Ovenbirds on your next hike in the woods, you know you are in a healthy forest ecosystem that is key to maintaining biodiversity in our state.

For more about Ovenbirds, check out the Monday Bird Report from May 4, 2020.

The Ovenbird, by Robert Frost.
“There is a singer everyone has heard,
Loud, a mid-summer and a mid-wood bird …”
Click to read it all.