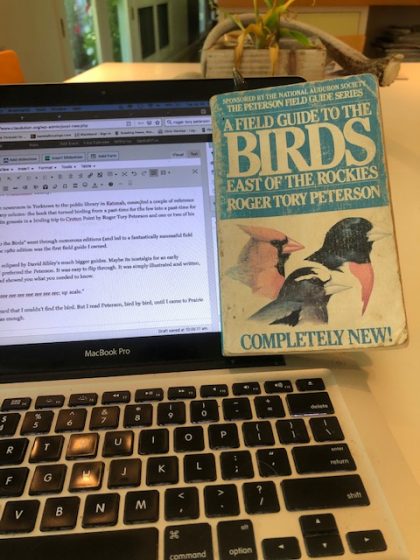 July 28, 2020 — When Roger Tory Peterson died — 22 years ago today, July 28, 1998, at his home in Old Lyme — I was on deadline and without an idea for the weekly “On Nature” column I wrote for the daily newspaper in northern Westchester County.

In local news, a local angle is everything. Idea-less, I remembered that Peterson came up with his idea for the seminal “A Field Guide to the Birds” while with a couple of friends some 65 years before. In northern Westchester County.

I drove from the newsroom in Yorktown to the public library in Katonah, consulted a couple of reference books, and had my column: the book that turned birding from a past-time for the few into a past-time for the masses had its genesis in a birding trip to Croton Point by Roger Tory Peterson and one or two of his buddies.

Birding and field guides were changed forever. “A Field Guide to the Birds” went through numerous editions (and led to a fantastically successful field guide series). The 1980 edition was the first field guide I owned.

Peterson’s guide has since been eclipsed by David Sibley’s much bigger guide. Maybe it’s nostalgia for an early infatuation, but I preferred the Peterson. It was easy to flip through. It was simply illustrated and written, and, if you were just getting started in birding, it told you and showed you what you needed to know.

The first time I heard that I couldn’t find the bird. But I read Peterson, bird by bird, until I came to Prairie Warbler, and it was enough.

Best of all, while you were out in the field, “A Field Guide to the Birds” lived up to its “field guide” promise: it fit into the back pocket of your jeans. For all of its other qualities and improvements, you can’t say that about Sibley. — Tom Andersen